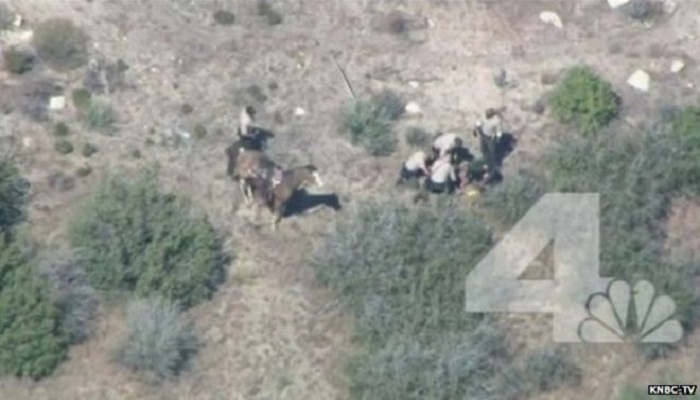 A news helicopter captured footage of the violent arrest

Ten California deputies have been placed on administrative leave after they were filmed beating a suspect during his arrest.
Francis Pusok, 30, led police on a chase through San Bernardino Valley from atop a stolen horse.
The incident was was filmed by a news helicopter and shows Mr Pusok being kicked in the head and groin.
Sheriff John McMahon told reporters: "I am disturbed and troubled by what I see."
The suspensions come amid other high-profile charges of police misconduct in the US. A South Carolina police officer was charged with murder this week after video emerged of him firing into suspect Walter Scott's back as he flees.
The footage, shot by TV station KNBC-TV, shows Mr Pusok falling from the horse after being hit by a deputy's stun gun. Deputies jump onto suspect and several begin violently punching and kicking him, even after he appears to be complying.

The attack lasts about two minutes. Mr Pusok, who is white, was taken to hospital with unknown injuries after being shown on camera laying completely still.
Mr Pusok's lawyer, Jim Terrell, described what he sees in the video as "thugs beating up my client."
Deputies had been attempting to serve a search warrant in a identity-theft investigation when Mr Pusok fled by car and then later on horseback.