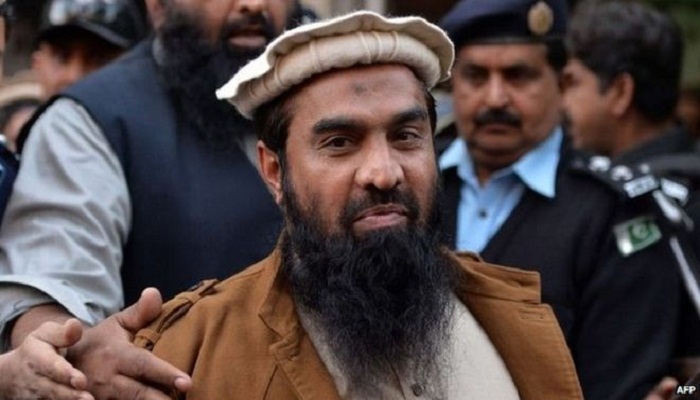 India has formally protested to Pakistan over its decision to release on bail the suspected mastermind of the 2008 Mumbai terror attacks.
India's ambassador in Islamabad met Pakistan's foreign secretary to "register our strong concerns" at the release of Zakiur Rehman Lakhvi, a government official in Delhi said.
The US and France also voiced concern.
Pakistan hit back, blaming India for what it called "inordinate delay in extending co-operation" over the case.
Zakiur Rehman Lakhvi was released from jail in Rawalpindi on Friday morning.
He had been granted bail in December, but was kept in detention under public order legislation.
That detention was declared void by the High Court, which ordered his release.
Mr Lakhvi still faces trial - along with six other suspects - over the attacks, which left 166 people dead and damaged peace efforts between the two countries.

Indian Home Minister Rajnath Singh had earlier called the release "very disappointing and unfortunate".
The ministry for external affairs said it had warned Pakistan that such a move "erodes the value of assurances repeatedly conveyed to us with regard to cross-border terrorism".
The US state department said it too had conveyed its concerns to senior Pakistani officials "over the course of many months and as recently as yesterday".
"Terrorist attacks are an insult on the collective safety and security of all countries," spokesman Jeff Rathke said.
Indian Prime Minister Narendra Modi has not publicly commented on the development, but on a visit to Paris on Friday it was mentioned by French President Francois Hollande.
"I express to you my indignation each time that a terrorist is freed while he still has responsibility for an abominable act," President Hollande told Mr Modi.
Zakiur Rahman Lakhvi's trial in the Mumbai attacks case still continues, but his release on bail suggests the legal evidence presented in court by prosecutors may not be enough for a conviction.
This contrasts with six years ago, when the interior minister at the time, Rehman Malik, provided graphic details of how a part of the Mumbai attacks conspiracy was hatched in Pakistan. Indian officials have since said that they also handed evidence against Mr Lakhvi and his comrades to Pakistani prosecutors.
Apparently, most of this evidence has not been made part of the case record, indicating legal complications and also perhaps a lack of interest on the part of Pakistani authorities.
Analysts say legal technicalities may be one factor behind his release. Another factor, according to some in the intelligence community, may be the fear in security circles that his "demobilisation" may hurt the morale of Kashmir-focused insurgents, something they say the government does not wish to see.
Profile: Lashkar-e-Taiba
In November 2008, a number of gunmen carried out a series of coordinated attacks targeting at least seven high-profile locations across Mumbai, including two luxury hotels.
The attacks were blamed on militants of the Lashkar-e-Taiba group (LeT) which Mr Lakhvi was accused of heading.
He was arrested by Pakistan on 7 December 2008, four days after he was named by Indian officials as one of the major suspects.
During his time in prison, Mr Lakhvi is said to have received special treatment which enabled him to remain in effective contact with the LeT rank and file.
Elements in the Pakistani establishment are known to have provided such facilities to jailed militant commanders whom they believe they may need in future.
The court order to free Mr Lakhvi on bail caused controversy as it came just after militants carried out a massacre at a school in Peshawar last December.
The attack prompted the civilian and military leadership to come together to make a rare call for action against "all shades of terrorism".