Obama says ‘days of meddling’ in Latin America are past 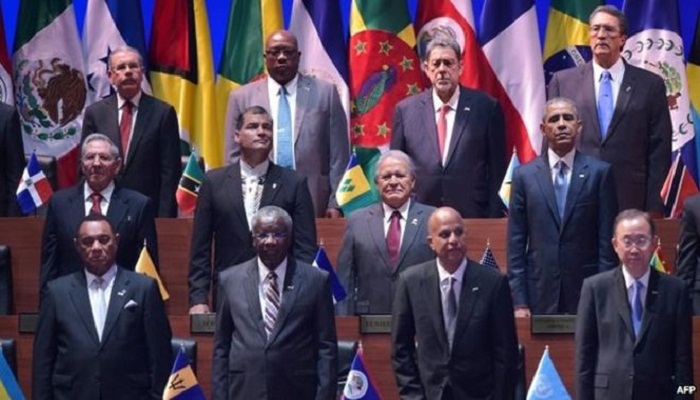 US President Barack Obama has told Latin American leaders that the days when his country could freely interfere in regional affairs are past.
He was speaking just before the seventh Summit of the Americas was due to kick off in Panama City.
Mr Obama and Cuban leader Raul Castro will meet face-to-face for the first time since a December detente.
But their much-anticipated meeting could be overshadowed by tensions between the US and Venezuela.
Mr Obama told a forum of civil society leaders in Panama City that "the days in which our agenda in this hemisphere presumed that the United States could meddle with impunity, those days are past".
Bumpy ride
At past Summits of the Americas, which bring together the leaders of North, Central and South America, the US has come in for criticism for its embargo against Cuba and its objection to having Cuba participate in the gatherings.
This seventh summit is the first which Cuba will attend and much of the attention will be focussed on the body language between the former foes.
The meeting will the be first formal encounter between the leaders of the US and Communist-run Cuba in more than five decades.
Mr Obama stressed that he hoped the thaw in relations would improve the lives of the Cuban people.
"Not because it's imposed by us, the United States, but through the talent and ingenuity and aspiration and the conversation among Cubans, among all walks of life. So they can decide what is the best course of prosperity."
While Mr Obama name-checked Cuba when he was talking about the US's days of meddling being in the past, the message was equally - if not more so - aimed at Venezuela.
Venezuelan President Nicolas Maduro has not only accused the US of meddling but of fomenting a coup against his government.
His open distrust of Mr Obama was only heightened when the US president signed an executive order last month declaring Venezuela a threat the the national security of the US.
US officials have since said the wording was "completely pro-forma" but the damage had been done.
It had not only incensed Mr Maduro but also Latin American leaders sensitive to what they see as US imperialist rhetoric.
The tone of the summit could well hang on whether Mr Obama's latest assurances sway Mr Maduro and his left-wing allies, who form a powerful bloc at the summit.
Mr Obama's comments came a day after the State Department recommended that Cuba be removed from the US lists of countries which sponsor terrorism.
Its presence on the list has been one of the main hurdles on the way to closer ties between the two countries.
The president said on Thursday that all he was waiting for now was a recommendation from his advisers, leaving many expecting an announcement at the summit.
The smooth progress made between Cuba and the US stands in contrast to the bumpy ride that have been relations between Venezuela and the US over the past months.
The two countries have not exchanged ambassadors for more than six years, but tensions rose last month when the US imposed sanctions on a group of Venezuelan officials it accuses of human rights abuses.
As part of the sanctions, Mr Obama issued an executive order declaring Venezuela a threat to the national security of the United States.
President Maduro has collected more than 10 million signatures demanding its repeal.
Their meeting at the summit, while less historic than the one between Mr Castro and Mr Obama, is drawing as much attention for its unpredictability.
Mr Maduro sent out mixed messages on Friday.
In a clear swipe at the US, he visited a monument to the victims of the 1989 US invasion of Panama just hours after he landed.
But he also said that it was "time nor for imperialism, but for peace".
"We're in a battle of ideas, in a fight so that Venezuela is respected, we're coming here in a constructive spirit, to make history through respect," he said.
Whether it will be Mr Maduro's combative spirit or his invocation for respect which will prevail should become clear on Saturday when the ceremonial part of the summit gives way to detailed discussions.