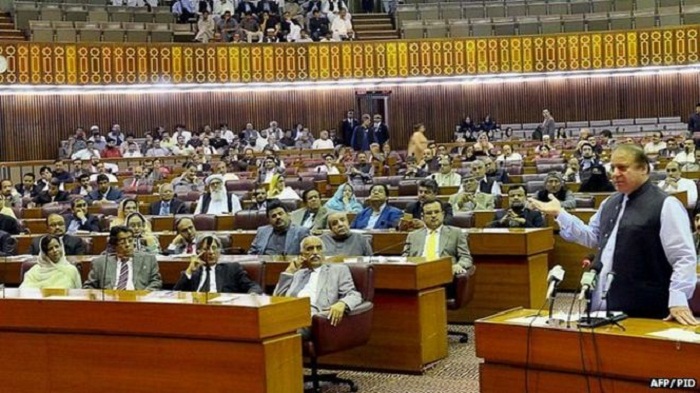 Many lawmakers have spoken out against sending troops to Yemen

ISLAMABAD: Pakistan's parliament has decided against military involvement in the Saudi-led coalition fighting Houthi rebels in Yemen, after days of debate.
Lawmakers voted unanimously in favour of a resolution that "Pakistan should maintain neutrality" in Yemen.
Saudi Arabia had asked Pakistan, an ally, to contribute ships, aircraft and troops to a military campaign it has launched against the Houthis.
Overnight, intense strikes by coalition warplanes battered southern Yemen.
The Saudi-led coalition says its aircraft have only targeted military camps, air bases, weapons depots and rebel headquarters, but civilian areas have often been hit.
The UN estimates that more than 560 people have been killed since 19 March.
Pakistan's parliament began debating involvement on Monday and many lawmakers spoke out against sending troops to Yemen.
Friday's resolution said that Pakistan should play a mediating role and backed the government's commitment to protect Saudi territory, which has so far not been threatened in the conflict.
Saudi Arabia and Yemen share a border and there are fears instability might spill into Saudi territory.
"The parliament of Pakistan expresses serious concern on the deteriorating security and humanitarian situation in Yemen and its implications for peace and stability of the region," the resolution said.
The Shia Houthi rebels are seen as being allied to Iran, a rival for power in the Middle East with Sunni-majority Saudi Arabia.
Analysts say Pakistan, which has a Sunni majority but also a Shia minority, fears being caught between the two if it sends troops to Yemen.
Earlier this week Iranian Foreign Minister Javad Zarif travelled to Pakistan to urge the country to reject the Saudi request.
Meanwhile two planes carrying medical aid landed in the capital Sanaa on Friday after days of failed attempts.
The International Committee of the Red Cross (ICRC) and the United Nation Children's Fund, UNICEF, said planes carrying more than 30 tonnes of medical supplies including medicines, bandages, intravenous drips and surgical equipment were in Sanaa.
Saudi Arabia launched the airstrikes after the Houthi rebels seized the capital, forcing President Abdrabbuh Mansour Hadi to flee to Aden, and later Riyadh.
Who is fighting whom in Yemen?
Houthis - The Zaidi Shia Muslim rebels from the north overran Sanaa last year and then expanded their control. They want to replace Mr Hadi, whose government they say is corrupt. The US alleges Iran is providing military assistance to the rebels.
Ali Abdullah Saleh - Military units loyal to the former president - forced to hand over power in 2011 after mass protests - are fighting alongside the Houthis.
Abdrabbuh Mansour Hadi - The president fled abroad in March as the rebels advanced on Aden, where he had taken refuge in February. Loyal soldiers, Sunni Muslim tribesmen and Southern separatists have formed militia to fight the rebels.
Saudi-led coalition - A US-backed coalition of nine, mostly Sunni Arab states says it is seeking to "defend the legitimate government" of Mr Hadi.
Al-Qaeda in the Arabian Peninsula - AQAP opposes both the Houthis and President Hadi. A rival affiliate of Islamic State has also recently emerged.