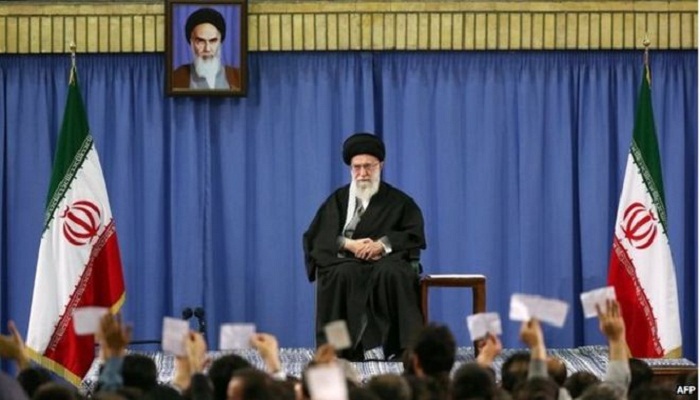 Iran's Supreme Leader Ayatollah Ali Khamenei has cautioned against seeing a preliminary agreement on his country's nuclear programme as the "guarantee" of a final deal with world powers.
Last week Iran and world powers reached a framework agreement on the issue.
But Iran also wants sanctions lifted "on the first day" of the final deal's implementation, against US wishes.
Iranian and US officials have been trying to persuade hardliners in both countries to back the deal.
The deal stipulates Iran must slash its stockpile of enriched uranium that could be used in a nuclear weapon, and cut by more than two-thirds the number of centrifuges that could be used to make more.
In return, UN sanctions and separate measures imposed unilaterally by the US and EU will be lifted as the global nuclear watchdog, the International Atomic Energy Agency (IAEA), confirms Iranian compliance.
"I have never been optimistic about negotiating with America. While I was not optimistic, I agreed with this particular negotiation and supported the negotiators," the statement went on.
Mr Khamenei also echoed earlier comments by Iranian President Hassan Rouhani, in which he insisted that sanctions must be lifted as soon as a final deal was implemented.
"We will sign no agreement but the one that immediately abolishes all the economic sanctions on the first day of the implementation of the agreement," Mr Rouhani said on Thursday.
Ayatollah Khamenei has decided to sit on the fence, for the time being. He says he will neither endorse or reject the agreement.
A lot of details will have to be dealt with, he says, before the preliminary agreement from last week will turn into a final agreement at the end of June - the deadline the two sides have set themselves for a comprehensive solution to Iran's nuclear problem.
But by not rejecting it, he has, in effect, consented to the premise of the agreement - that Iran would limit its nuclear activities in return for the lifting of sanctions. And that is a major step for the hardliners in Iran, including the country's leader.
Mr Rouhani's comments signal a difference in opinion with Western powers, who have said sanctions relief will be gradual and conditional on Iranian co-operation.
On Thursday, the US state department repeated this view. "Under the agreed-upon parameters, sanctions will be suspended in a phased manner upon verification that Iran has met specific commitments," spokesman Jeff Rathke told reporters.
It has published what it sees as the parameters of the agreement, one of which states: "If at any time Iran fails to fulfil its commitments, these sanctions will snap back into place."
The deal was celebrated by many in Iran but was dismissed by hardliners who say Iran surrendered too much in exchange for too little.
Similarly, some in the US Congress have been sceptical of the deal, while Israeli Prime Minister Benjamin Netanyahu has expressed fervent opposition.