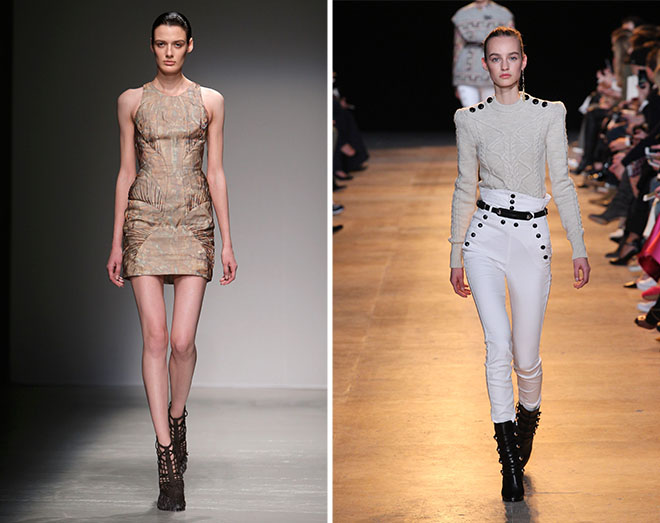 Top designer brands may be forced to start using models with a more normal body size to show off their latest wares as France looks to be well on its way to banning excessively thin models. France’s National Assembly, which is the lower house of Parliament, approved an amendment that would ban anyone who has a body mass index below a certain level from making money from modeling. The level will be determined later by decree once the law is passed by the Senate, but supporters of the measure are confident they have the votes to get it enacted before the end of the year, reports the Wall Street Journal.
Those pushing the bill had previously said models would have to present a medical certificate “showing a BMI of at least 18, about 55 kg (121 lb) for a height of 1.75 meters (5.7 feet), before being hired for a job and for a few weeks afterwards,” reports Reuters. The World Health Organization classifies people with a BMI lower than 18.5 as underweight.
Proponents of the law want it to be more than merely symbolic and the measure carries a stiff fine of as much as $83,000 for those who break it, along with as many as six months behind bars. The move is seen as part of a broad effort by the government to combat anorexia and includes a provision requiring that any re-touched photo that alters the appearance of a body for commercial purposes—whether it be to make someone thinner or fatter—carry a label that makes it clear it was retouched. “It is difficult to determine how broadly the authors intend the photo retouching provision to apply,” notes the New York Times. “It could apply to photos used in advertisements for a multitude of products, not just those related to clothes or fashion.” The bill would also make it illegal to encourage anorexia.
Although many of the big fashion houses have not commented publicly on the measure, modeling agencies have largely opposed the efforts to place a line on what kind of body is acceptable to sell clothes and other products. “Our models are thin, not sick. They are young and thin,” the head of a model agency trade organization said. A member of the opposition called the measure “inapplicable and discriminatory.” And France’s national model agency union Synam said it would hurt the country’s models and push designers to look elsewhere, reports the Telegraph. "French model agencies are constantly in competition with their European counterparts,” the union said. “As a result, a European approach is essential.”