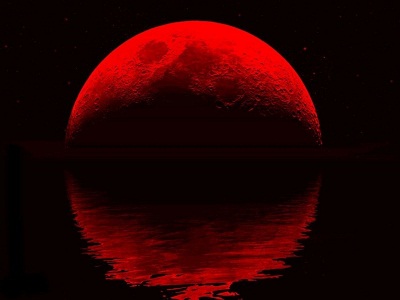 Today April 4, Saturday will be very different than regular days. The moon will turn red and it is referred as the Blood Moon. So much mysticism, speculations both religious and scientific surrounds this phenomenon. Some cultures consider it a miracle while some consider it to be a curse. Some have prophecies surround it. But almost every religion has a direct or indirect mentioning of the Blood Moon. We take a look around what is believed by the mass.

The Blood Moon Prophecy is a theory studied and taught by some Christian ministers, such as John Hagee and Mark Biltz, which states that an ongoing tetrad (a series of four consecutive lunar eclipses—coinciding on Jewish Holidays—with six full moons in between, and no intervening partial lunar eclipses) which began with the April 2014 lunar eclipse is a sign of the end times as described in the Bible in Acts 2:20 and Revelation 6:12.

On April 15, 2014, there was a total lunar eclipse. It was the first of four consecutive total eclipses in a series, known as a tetrad; a second one took place on October 8, 2014, (the remaining two eclipses will take place on April 4, 2015 and September 28, 2015). It is one of eight tetrads during the 21st century AD. As with most eclipses, the moon appeared red during the April 15 eclipse. The red color is caused by Rayleigh scattering of sunlight through the Earth's atmosphere, the same effect that causes sunsets to appear red.

The idea of a "blood moon" serving as an omen of the coming of the end times comes from the Book of Joel, where it is written "the sun will turn into darkness, and the moon into blood, before the great and terrible day of the LORD comes This phrase is again mentioned by Saint Peter during Pentecost, as recorded in Acts, although Peter says that date, not some future date, was the fulfillment of Joel's prophecy. The blood moon also appears in the book of Revelation chapter 6 verses 11 - 13, where verse 12 says " And I beheld when he had opened the sixth seal, and, lo, there was a great earthquake; and the sun became black as sackcloth of hair, and the moon became as blood"
Around 2008, Biltz began predicting that the Second Coming of Jesus would occur in the fall of 2015 with the seven years of the great tribulation beginning in the fall of 2008. He said he had "discovered" an astronomical pattern that predicted the next tetrad would coincide with the end times. When the prediction failed, he pulled the article from his website, but continued to teach on the "significance" of the tetrad.
Hagee would seize on Biltz' prediction to write Four Blood Moons, which would become a best seller, spending more than 150 days in Amazon.com's top 150 by April 2014. For the week ending March 30, 2014, it was the ninth best selling paperback, according to Publishers Weekly. By mid-April, Hagee's book had hit No. 4 on the The New York Times best-seller list in the advice category. Hagee's book (and subsequent sermon series at his home congregation, Cornerstone Church) did not proclaim that any specific "end times" event would occur (as did Biltz in his original prophecy), but claimed that every prior tetrad of the last 500 years coincided with events in Jewish and Israeli history that were originally tragic, yet followed by triumph
In Judaism these predicted phenomena have been linked to the prophetic passage that states, “I will set wonders in the heavens and the earth: blood and fire and pillars of smoke; the sun will turn to darkness and the moon to blood before the coming of the great and awesome Day of Hashem” (Yoel 3:3). It also says, “However, when the Jews do the will of the Omnipresent they need not worry about all these omens, as it is stated: ‘Thus said Hashem: do not learn from the way of the nations. Do not be frightened by the signs of the heavens, though the nations are frightened by them.’ The idol worshipers shall be frightened [of celestial omens]; the Jews, [however], need not be frightened” (Sukkah 29a).”