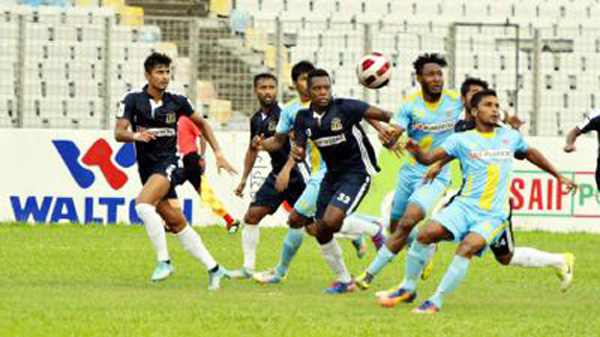 In a clash of two Chittagong based clubs, league leader Chittagong Abahani was forced to drop points in the Bangladesh Premier League when their match against Saif Sporting Club ended goalless at Bangabandhu National Stadium on Sunday.

Title contender Chittagong Abahani still sits on the top of the 12-team table with 26 points from 10 matches while Saif SC stuck glued at the fourth position with five draws, four in a row, having 19 points from 10 outings.

Chittagong Abahani came into the match on the strong position with three successive wins over Sheikh Jamal, Brothers Union and Mukitjoddha Sangsad but they put up below par performance against Saif SC, a team which are sponsored by Chittagong Abahani football committee chairman.

However, it was Chittagong Abahani who created the first chance in the match in the 18th minute when Zahid Hossain put a center for striking duo Towhidul Alam Sabuj and Nigerian Afeez Olawale Oladipo but both of strikers tried to capitalize the opportunity inside the box and the chance went wobbling, much relief for Saif SC goalkeeper Pappu Hossain. .

After breather, Saif were looking in impressive form as they took full control of the proceedings and created three good chances but their strikers made a mess of everything by spoiling those chances.

Saif SC winger Jewel Rana and Chittagong Abahani midfielder Masuk Mia collided inside the box over the control of the ball which went to unmarked Colombian striker Hember Valencia Olaya, who let loose a powerful shot but was unbelievably denied by Chittagong Abahani's onrushing goalkeeper Ashraful in the 76th minute.

Then it was again Saif SC who saw a header from Hember went narrowly wide in the 85th minute and three minutes later, Hember raced to the box to muster a curling shot to the far post but he was again denied by Ashraful and the newcomers had to be content with fourth draw in as many matches.

Saif SC coach Ryan Northmore and team leader Kim Tyrone Grant were sent off in the dying moment by referee Jalaluddin, who later booked two more players of Saif SC following the arguments with him after the final whistle.