Magnanimousness of a Nonagenarian Woman Change-Maker 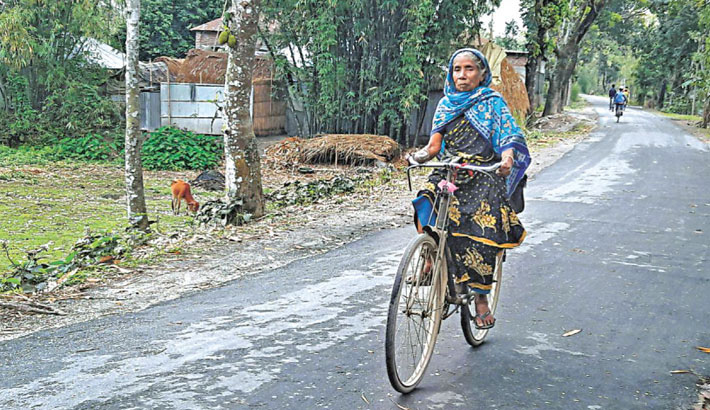 Few will have the greatness to bend history itself, but each of us can work to change a small portion of events. It is from numberless diverse acts of courage and belief that human history is shaped.

Each time a man or a woman stands up for an ideal, or acts to improve the lot of others, or strikes out against ailments, he or she sends forth a tiny ripple of hope, and crossing each other from a million different centres of energy and daring those ripples build a current which can sweep down the mightiest walls of human illness. A front page news report has described her as a “Change Maker.” She is Madam Jahiron Bewa, a 94-year old woman who read up to class three only. In fact, she is a significant change maker in healthcare related work of remote villages in Aditmari upazila (sub-district) of Lalmonirhat District, a district situated at the northern border of Bangladesh. It is above 350 kilometres away from the metropolitan Dhaka City. Bangladesh is a densely populated country having 160 million+ populations in South East Asia covering almost one hundred thousand villages.

The report further says, “She trained in basic healthcare and family planning in 1973, has been treating patients around the upazila every day for more than 4 decades. She treats common ailments and gives free healthcare advice to the patients.” Maybe like Mother Teresa, Madam Bewa believes, “I alone cannot change the world, but I can cast a stone across the waters to create many ripples.”

Poor communities in remote and inaccessible areas tend not only to be cut off from family planning education and services, but they are also deprived of basic primary health care services. Efforts to bring family planning to such communities and populations should, therefore, be linked with other services. In the remote villages, education and health levels are low and people live according to ancient customs. It is a dire emergency need to develop a community programme of family planning and health care offering education and prevention to improve the quality of people’s lives. Madam Bewa has been providing health care services to people of more than 100 villages in that remote area. Lack of medicines, equipment, severe shortages of doctors, nurses and paramedics retard development of rural people’s health problems in Bangladesh.

People in these areas are very poor and so they are forced to all live together without any medical support. She says, “Patients struggle to access care, so they often only get to me when they are very, very sick. I know it sounds like a silly thing to say but when doctors who come from other parts of the country here, they comment to me on how sick our patients really are.” In remote villages like Jahiron’s Upazila, babies die a lot, from diarrhoea especially. There are no taps around here. People are fetching water from the river. They just go and fetch and drink, without boiling the water. Disease rates, as well as numbers of deaths, spike when rural public healthcare facilities run out of medicines and other essentials and the government fails to deliver important medical equipment.

People say rural public healthcare in Bangladesh is now suffering tremendously because of incorrect management and administrative appointments. “Can you imagine that?” some people ask. “These people are so sick themselves and so scared of death themselves, and now they have to stare at a dead body for the whole night. It terrifies them, but all we can do is to cover the body and wait….” But for Jahiron and many health workers, and for the patients who continue to suffer and even die, the reforms so far instituted by the government are not enough. And the public health sector in Bangladesh’s biggest economy, and especially in its rural hinterland, continues to lurch from crisis to crisis. Madam Bewa’s work is an act of faith, motivated by her own personal desire to make…Faith can move a mountain, but here we see that faith can also build an incredible…This woman has built something incredible against all odds and turned it into a symbol of people everywhere in the world. It is all her exceptional work, and she is a good woman. She is an example of humanity for everywhere in the world.

The population receives key maternal and child health interventions including family planning, prenatal care, skilled care at childbirth, and a range of childhood immunizations. Women often don’t have access to maternal and reproductive health services because they face discrimination, lack the funds needed to pay for health care services, or are prevented from making their own health decisions. Often, services are least accessible for people who live in rural areas, and for indigenous women for whom services often do not reflect their cultural values and needs. Many young people lack information about their sexuality or access to reproductive health services, a critical problem for working teenagers, who lose the benefits of school-based sex education just when their sexual lives are beginning.

In comparison to the developing world, services and maternal health outcomes in rural areas lag far behind. This is often related to poverty, but can also be an outgrowth of social and cultural barriers that keep women from seeking the care they need, or from government’s failure to allocate the human and financial resources needed to provide accessible, high-quality care. There should be a roadmap to contribute useful information that will support government in identifying strategic policies to facilitate political decision-making related to the construction of universal health systems in Bangladesh. Health is a constitutional right in Bangladesh and has been prioritised in all national development plans. The Ministry of Health is the national health authority. Local government authorities are obliged holding local meetings regularly and this serve to involve communities in assessing needs and decision making in health development and service delivery. Bangladesh is still among the poorest countries in the South East Asian hemisphere and scores low on health indicators in comparison with the average scores in other countries. Many challenges are present in the context of Bangladesh that needs to be addressed before its well-designed integrated public healthcare system which may impact on health of the people.

The local English Daily has reported, “Nonagenarian Jahiron Bewa rides her bicycle to houses in the villages of Lalmonirhat’s Aditmari. Everybody knows her very well in that locality, and the villagers have fondly laurelled her as “Banglar Nani (Grand-mother of Bangladesh).” She keeps herself busy providing sick villagers across the upazila with healthcare advice for common diseases. She never takes a fee for her visits, charging only market prices for medicines, and sometimes for the poorest villagers her supplies of medicines are free-of-cost too. She is not a doctor, but she has excellent practical experience and by following her advice for general diseases, people are sure to be cured. She says, “I cover around 30 villages every month and I earn about Tk.150 per day from medicine sales.”

She is physically industrious, but her main asset is her smiling face. “I haven’t suffered any kind of disease for the last 50 years”, says ever-determined Jahiron, demonstrating the smile for which she is renowned. She says, “Her work is not only about her. It is work for the welfare of society and that everybody should strive for it. Her life is as simple as a bicycle wheel turning: to provide healthcare services to the villagers in Aditmara until her final breath. She provides services for common ailments like fever, headache to poor patients.” She has agape love in action seeking to bring hope to the poor and disadvantaged in the remote hamlets in Lalmonirhat District, by providing physical and medical aid. It is not just a searing midday sun that’s responsible for the rivulets of perspiration running down his cheeks when she pedals village after village. Bangladesh has huge challenges to overcome in meeting needs with a qualified workforce. Since it will be difficult to have an entire team serving a very small village on a permanent base, it remains important to have all-round health workers that can respond to the broad range of tasks from health promotion to treatment and care of common illnesses. Bewa through her work on health systems is a new actor to the country with attention to rural people health caring.

Health workers claim Bangladesh public healthcare system, especially in the more isolated districts, is characterised by bad management, administrative inefficiency and poor planning. It rarely has paramedics, because there is a huge shortage of paramedics here. Millions of people in the country struggle to access healthcare. It is the poor who live far from the cities who are dying. The wealthier people can afford good private healthcare. The resources needed to roll out healthcare programmes, are a massive burden for any country, let alone a developing country, to bear. In the quest for an effective delivery model for rural and remote communities, the focus of health services should be on ensuring how community needs are met and how transformative changes can be inculcated within the system.

While engaging the community is a transformative move where they themselves becomes the driver of change, any other structural changes should also be encouraged. It is necessary to ensure that service delivery model should relate to contexts in which health needs arise and health practitioners operate. For example, in seeking to maximise rural health outcomes, health practitioners could offer real opportunities to establish more integrated and focused patient care. The obstacles faced by health care providers and patients in rural areas are vastly different than those in urban areas. Economic factors, cultural and social differences, educational shortcomings, lack of recognition by legislators and the sheer isolation of living in remote areas all conspire to create health care disparities and impede rural people in their struggle to lead normal, healthy lives.

Madam Jahiron Bewa, the golden ager, is an imitating figure for rural people around the world. The oldster understands the needs of poor people in distress health conditions and the ways in which she could provide help to them guided her throughout her life. By the force of her personal example, she has opened paths to the new field of such noble service. She says, “I ought to be satisfied. I believe I am.” Coming events are to show, however, that she would never be satisfied except by responding again and again to the call of human need. Due recognition is needed for her selfless healthcare services to rural poor people at her so old age to the rural people in Aditmari upazila in Bangladesh by the Bangladesh government as well as by the international communities. Amy Leigh Mercree has said, “Kindness can transform someone’s dark moment with a blaze of light. You’ll never know how much your caring matters. Make a difference for another today” and Madam Bewa has long been making differences to bring about the bright smiles on the faces of poor sickly people in remote villages in Bangladesh. We salute her from the core of our hearts.