Artist, Academic, Shaman: Joseph Beuys on His Mystical Objects, in 1970 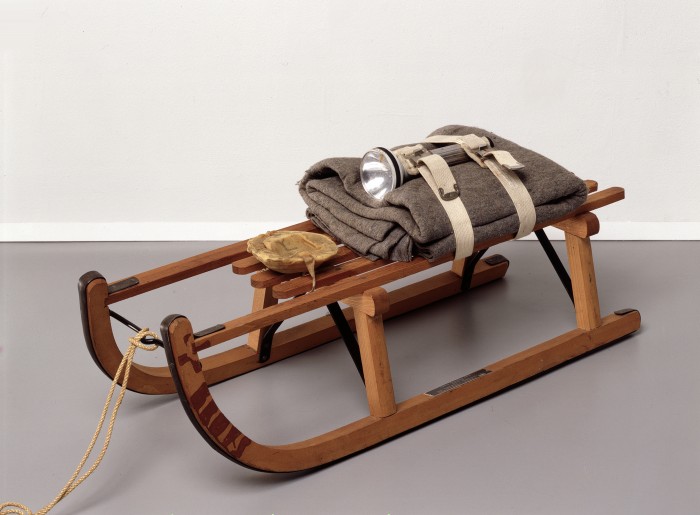 A wooden sled with a roll of felt and a flashlight strapped to it, a mound of fat, and a lightbulb plugged into lemon are just three of the 500-plus Joseph Beuys works currently on view at Mitchell-Innes & Nash in New York as part of “Joseph Beuys Multiples.” These objects, curated from the collection of Reinhard Schelegel, are off-putting—anti-academic, anti-market, and anti-modernist.

Until his death in 1986 at the age of 64, Beuys combined personal histories (both true and false ones—he had a tendency to invent intricate myths about his life), ’60s and ’70s avant-garde sensibilities, and spirituality. He was often seen as an art-world wacko, and he was especially controversial in his home country Germany, where he often gave theoretical, well-attended lectures about art and German politics. (Some of the blackboards he wrote on, which were frequently saved as art objects, are on view in the “Multiples” show.) Still, Beuys had defenders, one of whom was Ursula Meyer. In 1969, Meyer spoke to Beuys and then, for the January 1970 issue of ARTnews, she turned that conversation into a profile called “How to Explain Pictures to a Dead Hare,” named for one of Beuys’s most sensational performances. The full article, in which Beuys explains his philosophy on religion and art, follows below.—Alex Greenberger

“How to Explain Pictures to a Dead Hare”
By Ursula Meyer

Joseph Beuys’s “Actions,” objects and polemics, often coated with fat and festooned with felt, have made him one of the most controversial artists in Germany

In August, 1969, I visited the German artist Joseph Beuys in Düsseldorf. The man and his work are renowned in Europe. Our discussion lasted three days and “the man with the hat,” as the German press calls him (for he is seldom without it) poured forth his ideas—stream-of-consciousness fashion. Joseph Beuys brings to art/anti-art a specific metaphysical concern which makes his position unique in a field that is becoming rapidly politicized. His philosophy seems to matter more to him than his formidable oeuvre. He has evolved a rather systematized complex of ideas that includes every branch of science, human endeavor and thought, culminating in a concept of “Love-substance”—a transreligious Christian Liebestraum. It does not matter whether his creed is convincing or not; he is a believer. It is precisely that belief which lends authority to his work, permeating it with religious concern and making it impervious to the influence of prevailing styles from America or the continent.

Beuys was born in Kleve, Germany, in 1921. During World War II while serving as a Stuka pilot at the Eastern Front, he was shot down and badly wounded. After the war he studied natural science, but rejected the “atomistic character” of biology and switched to art. He felt drawn, he told me, towards painting and sculpture, towards forming and expressing a totality of existence that could effect a transformation of human beings. In 1947–52 he studied with Enseling and Mataré at Düsseldorf Academy which, in 1961, appointed him professor of sculpture.

As a teacher, Beuys poses a formidable threat to his colleagues. He is not a political agitator, but is intent on revolutionizing the Academy. His classes are attended by sculptors, musicians and writers; his concern is the interrelation of all art forms. He rejects the assumption that he should limit his teaching to training sculptors; what matters for him is the student’s humanity. He believes that art and the insights gained through art become a formative influence on life. He wants a situation where life and art become one. Academicians sense that in this ideal state an Academy would be superfluous.

Beuys is not an ivory-tower artist, but is intensely involved in organizational activities. He belongs to Fluxus, an International radical art movement concerned with far-out poetry, music, Happenings, disruptive Events, Neo-Dada and Anti-Art. He is founder of the D.S.P. (Deutsche Studenten Partei) which has unceasingly plagued the Academy, forcing the alternatives of either changing or closing the institution. The rebellion reached proportions involving the government and the Ministry of Culture. He has been attacked, vilified and arrested in connection with his performances. Obviously his “Actions” and teachings hit a raw nerve, but the infuriated reaction of professors and press have not frightened him into retreat. Seemingly thriving on controversy, he keeps his cool in the middle of the storm.
Press and professors also have berated the artist. His choice of materials evidenced poor taste . . . with an air of contempt the press questioned his “attitude.” “My attitude towards art is good,” he told Kunst in 1964, “likewise my attitude towards Anti-Art.” Beuys sees the label “Anti” directed solely against the stagnation of the mind. For him Anti-Art involves an expansion of consciousness concerning the metaphysical aspects of every human endeavor—scientific, social, political. He calls for anti-mathematics, anti-chemistry and anti-physics, all of which must relate to our non-physical nature. Natural science will not get very far with out anti-natural sciences, otherwise they will endanger the Anti-Nature of man, i.e. his non-physical self: “We have to revolutionize human thought . . . First of all revolution takes place within man. When man is really a free, creative being who can produce something new and original, he can revolutionize time. When he has self-confidence and pays no attention to the surrounding political structure, he can decide for himself how the future looks. And to the degree that he contributes creatively to world processes, important to all men—to every single one—to that degree and at that moment he will enjoy what you call happiness.”

His activity is relentless. He decries passivity and condemns escapism into drug-induced illusion. He doubts the benefits of Oriental philosophy, for example Zen Buddhism, as basically foreign to the Western mind and offering a false sense of pacification that inhibits activity. He favors Existential Christianity: “At present Christianity does not even exist. Christianity will come into being only in the future. To create Love-substance out of social substance, that is the issue! This is not a question of socialist idea structure or sociology, but of man’s changing from within.” The idea of salvation through Love, which for Western man can be only Christian love—reverberates through Beuys’s work.

His work has been shown in many European galleries and museums, most recently at the Kunstmuseum, Basel, where 172 drawings were chosen for an exhibit from more than 4,000 works. Beuys is a magnificent draftsman with an utterly unconventional choice of materials: gauze, cardboard, felt, clay, fat, cloth drenched in blood and carefully stitched together. The spontaneity of his line ranges from lyrical tenderness to raw brutality. His work conveys an “old look,” almost moldy, in seeming contradiction to its modern feeling. His unorthodox techniques yield a symbol rather than a drawing; not abstractions, but revelations of a private mythology. Beuys told me that for him drawing is now a thing of the past. Except for some occasional Partiturs (or “scores”) for his “Actions,” it is no longer relevant to what he wants to say.
His sculptures extol poverty, decay and the nagging power of time. “You can make sculptures of anything,” he says. He uses fat, felt, wire, pots, chairs, cartons, shovels, sausages, toy trains, sleighs, tents, discarded utensils, etc. Many of his sculptures are created during his “Actions”; other works are slated for later use in his demonstrations. Objects become activated participants in his “Actions.” Like Ionesco, he depicts the power and independence of the impoverished object in revolt. The chair, accommodating a wedge of fat, rejects the sitter. The bone-radio is eerie rather than whimsical—its marrow his been replaced with electronics. Shovels with two handles spoof exaggerated usefulness. Serviceability ad absurdum becomes object revolt. The layered sculptures of fat and felt—simulating accumulators or energy—are repulsive, evoking a feeling of grime and filth. The revolt of objects becomes revolting, yet they acquire a negative attraction which pulls the viewer into the fantastic spiderweb of Beuys’s private reality. He chooses fat as a material because it is plastic and lends itself to certain “atavistic gestures” during his “Actions.” He jams it in corners and crevices; he uses it for extending canes. A walking-stick extended with fat teases function. Beuys bit on lumps of fat in the “Action” titled Main Stream and the imprints of his teeth become the Main Stream. Fat for him is a prototype material—“Urmasse”—and his fat-corners change a room into a Beuys environment. A fat-corner in a box de-objectifies it, rendering it useless. Surrounding grease spots—ordinarily considered disgusting—give the box a dirty dignity. Some of his sculptures consist almost entirely of fat. They look like delicate moonscapes with surfaces full of tiny craters. Others express strength—round fat layers form bases and a fat-shelf supports a fat-form. The objects are either rebellious or elusive. In his “Action” Masse und Vakuum he used 100 airpumps dressed on one side with fat. He pulled the pumps forcefully apart to make loud thumping sounds. After having demonstrated this pneumatic principle, he buried the pumps plus 35 pounds of fat cakes in a “T”-shaped steel box and welded on the cover. The objects disappeared forever. Does this “Action” mean that to dominate an object is to lose it? Or does it relate to Lohengrin’s notion that disappearance is the price for revelation? But to rationalize the artist’s symbology changes and distorts the experience.

Many of Beuys’s “Actions” concern Anti-Space and Anti-Time—Non-Physical time, time before birth and after death. The eternal question concerning the existence of God is in the last analysis a question of space and anti-space. “The question ‘Who created space?’ presupposes a creator.” Beuys’s “Actions” are the quintessence of his teachings, having an almost ritual character. Extended time and constant repetition lend them the character of Existential Passion plays.

The “Action” 24 Hours lasts 24 hours. It is a performance of sustained, self-imposed martyrdom. Beuys, wearing his personal uniform—hat, short vest and boots—stays on a small orange-crate, covered with white oilcloth, for the full length of the performance. He neither rests nor eats. He strethces and strains for objects placed almost out of his reach. His feet never lose contact with the box. He goes through a real physical ordeal—his face is contorted. Yet he acts with vigor, ramming two-handled shovels into the floor. A tape recorder plays stammered texts. Now and then Beuys stops and listens to a fat-box. His face glows with ecstatic fervor. Before acting in 24 Hours Beuys fasted several days—preparing himself like a monk, fasting for purification and enlightenment.
Joseph Beuys, Felt Suit, 1975, sewn felt, ink stamp. COURTESY MITCHELL-INNES & NASH, NEW YORK.
Beuys is a man of extraordinary complexities, a persecuted dreamer desperately defending himself and a skillful organized with good horse-sense. His innocence is matched by a talent for manipulating events; no matter how bitterly he is attacked, he always comes out on top. He alternates an analytical reserve with a magnetic presence. He is rational and irrational, scholar and mystic. He is an other-worldly ascetic and superb cook who discusses recipes with a gourmet’s relish. He is beset by death consciousness, yet his mischief outrages academicians. He evolves apocalyptic “Actions”—and becomes their victims. He is the artist and he is the œuvre.