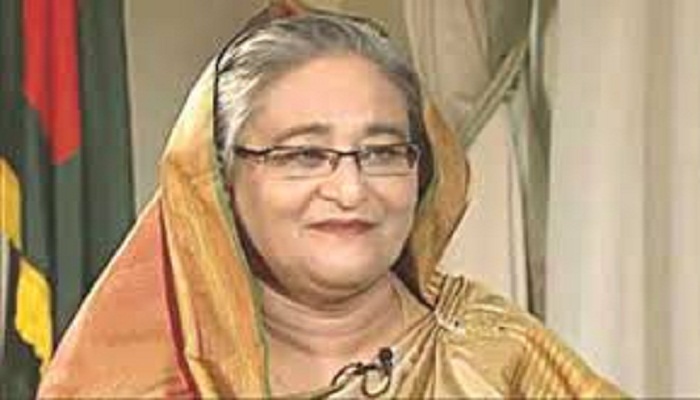 Prime Minister Sheikh Hasina has said Bangladesh never felt scared in facing problems while it would make its way ahead despite the influx of tens of thousands of forcibly evicted Myanmar citizens.

"We, the Bangalee nation fought and liberated the country at the call of Father of the Nation Bangabandhu Sheikh Mujibur Rahman . . . we never become scared if any problem arises, premier's press secretary Ihsanul Karim Ihsanul Karim quoted her as saying while exchanging views with Awami League leaders based in UK and other European countries.

She said, rather, "we want to advance further by tackling it (problem)."

The premier said discussions with Naypyidaw began to resolve the crisis with the recent Dhaka visit of a senior Myanmar representative but Bangladesh extended shelter to the victims of forced exodus on humanitarian grounds as people of the country always believed in humanity, reports BSS.

"Human beings are for human beings. . . . we cannot throw them out (Myanmar people) to the Bay of Bengal (and) If we could feed 16 crore people, we can also feed additional five to seven lakh people at their time of distress," she said.

"If necessary, we'll eat one meal a day and share another meal with these distressed people . . . we're not that rich but our heart is big and we stand for mankind."

The premier said the hapless Rohingya people who fled to Bangladesh will be shifted to an island called "Bhasan Char" from Cox's Bazar.

Sheikh Hasina who along with her younger sister Sheikh Rehana visited the Rohingya camps in Cox's Bazar before flying to New York to attend the 72nd session of the UN General Assembly narrated horrifying stories she heard from the fleeing women and children from the Rakhine State of Myanmar.

She said the civil administration, army, navy and air force, BGB, police and her party volunteers were working hard to mitigate the sufferings of these people.

"Without waiting for any external assistance, we've made arrangement for accommodation, food and medicine," she said.

The premier said the international community was amazed to see the generosity of accepting such a huge number of people by the Bangladesh government.

Sheikh Hasina recalled her own life in refuge abroad after Bangabandhu's assassination on August 15 in 1975 saying "we know well about the refugee life as I and my sister had to lead such a life for six years".

While talking about the country's biggest infrastructure project Padma Bridge, the prime minister expressed happiness over the installation of its first span on saying "we've proved, we can".

Sheikh Hasina recalled her government's decision to finance the mega project from its own fund in the wake of hostilities and conspiracies from different powerful quarters including the World Bank that withdrew its loans from the bridge on false and fictitious charge of corruption.

The PM said the construction of the Padma Bridge by the own fund was a big challenge for her government.

"It was a big challenge for us to finance the project from our own fund and we became victorious in this challenge," she said.

Sheikh Hasina said ill efforts were made by vested quarters to tarnish her and her family's image by bringing false allegations of corruption. "But all allegations were proved false in the Canadian Federal Court," she said.

Referring to her objective of politics, Sheikh Hasina said: "We do politics for the people, we do work for the people and we've proved we can."

"Our goal is to establish Bangladesh as a dignified nation in the world. We don't want to move by begging hand ... we want to move with self dignity," she said.

On the recent flood in the country, the prime minister said massive damage of crops was done by the deluge but food stocks were adequate and yet the government import of rice was underway so that the people don't suffer in any way.

Sheikh Hasina also mentioned the appalling destruction and mindless atrocities perpetrated by the BNP-Jamaat nexus in 2013, 2014 and 2015.

"They killed 235 innocent people and 26 members of law enforcement agencies by unleashing petrol bomb attacks. Even children, pregnant women and female schoolteachers were not spared from their arson attacks," she said.

The prime minister said the BNP chairperson in her graft cases sought time for 140 times to appear in the court and filed application for 24/25 times to change the court.

Sheikh Hasina urged the expatriate leaders of Awami League and its associate bodies to work unitedly for the victory of the party in the next general elections.

She also called upon them to further brighten the country's image abroad through their work.