Quader warns all of anarchy in Rohingya camps 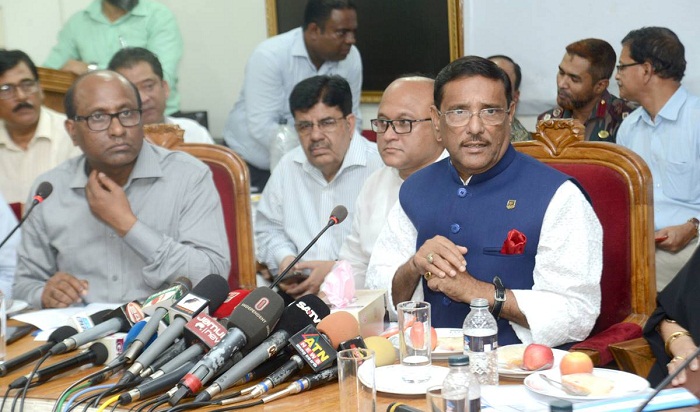 Road Transport and Bridges Minister Obaidul Quader has advised all concerned to work with caution as there is risk of evil force getting into Rohingyas who have taken refuge in Cox's Bazar.

The Awami League joint secretary alleged that BNP is trying to create anarchy in the country over the Rohingya issue.

The AL leader made the advice and allegation while distributing relief materials among the Rohingya people at Kutupalang Rohingya camp in Cox’s Bazar on Thursday.

"The number of Rohingyas has increased in an unprecedented manner. Evil forces might enter into this wave. So, we have to work with caution," Quader told.

He also warned all about BNP activities saying they have started ill politics over the Rohingya issue as they did centering the Chief Justice.

Bangladesh has sheltered about 500,000 lakh Rohingya people since August 25 on the humanitarian ground and more Rohingyas are waiting to come here, the minister said, adding that all assistance including, shelter, food, health service and security, are being given to the forcibly displaced people.

"The government has stood by the persecuted people. So, no politics should be done centering the humanitarian assistance to the Rohingya people," the AL general secretary said.

Earlier, on Wednesday night, Quader addressed a coordination meeting of NGOs at the district administration conference room and announced to form a NGO coordination authority led by the deputy commissioner (DC) of the district for conducting all works properly.