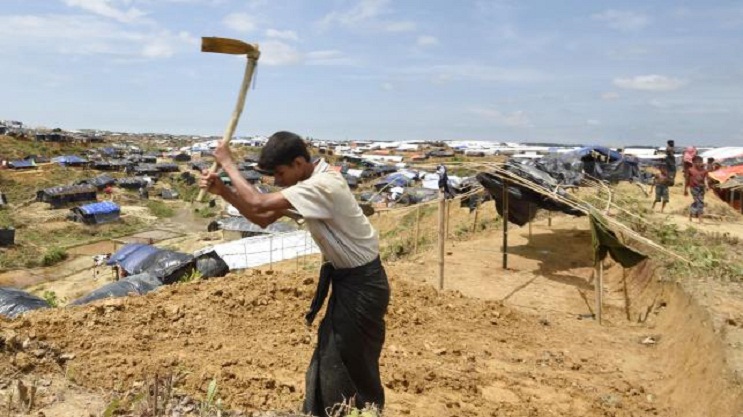 Disaster Management and Relief Minister Mofazzal Hossen Chowdhury Maya on Thursday said the government will construct shelter camps for the Rohingyas on 3000 acres of land beside the Kutupalang frontier camp with a view to accommodating some 5,23,000 Rohingyas, forcibly displaced Myanmar citizens on temporary basis, reports BSS.

"The government earlier had allocated 2000 acres land ...but now it has been increased to 3000 acres for well accommodation of the increased number of Rohingyas," said the minister while addressing in a press briefing at ministry's conference room here.

As the Prime Minister termed Rohingya crisis as not only a crisis for Bangladesh, it is a problem for the entire world, the minister said as per the directives of the Prime Minister the government has taken all out measures for accommodating these forcibly displaced Myanmar citizens.

As per the twenty-two directives by the Prime Minister's Office (PMO), he said the government has already been developing 3000 acres forest land adjacent to the Kutupalang camp for developing shelter for as many as 5,23,000 Rohingyas, who have so far been entered into the country since August 25, this year.

Under the PMO's directives, the government will construct 1,50,000 sheds on the area to accommodate the increasing number of these forcibly displaced people of Myanmar, the minister told the briefing, adding "at first we had a plan to construct 84,000 sheds but now the number of the shed has been decided to increase for the rising number of Rohingyas by this time." The Disaster Minister said the World Food Programme (WFP) of the United Nations is now providing food for some 5,20,000 Rohingyas . The required food for the rest of the Rohingyas would be included under the new WFP budget, said the minister.

In addition to this, the government will construct 9 kilometers long electricity lines at the extension areas of the Rohingya camps. Even more 17500 latrines would be constructed while 35,000 latrines already have been constructed at the camp areas, the minister pointed out.

"We want peaceful solution of the Rohingya crisis so we have developed a unique area for the displaced Rohingya people as they can safely repatriate to Myanmar," said Shah Kamal, secretary of the Disaster Management and Relief Ministry.