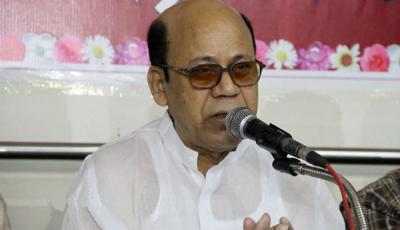 Food Minister Advocate Md Qamrul Islam has said Bangladesh has no food crisis as the country has adequate stock of foods both in public and private sectors.

"Although the country faced severe floods...production of crops was hampered. But the country has no food crisis," said the minister while addressing the inaugural session of a day-long international workshop titled "Eliminating Hunger and Malnutrition: Are Sustainable Solutions in Sight?" at a city hotel on Wednesday, reports BSS.

The country has lost 20 lakh tonnes of foods due to the recent floods, but it has no shortage of foods now as the government has taken advance steps to import foods aimed at averting possible food crisis, Islam added.

With Additional Secretary of the Ministry of Agriculture Mohammad Nazmul Islam in the chair the programme was also addressed by State Minister for Women and Children Affairs Meher Afroze Chumki as the special guest.

While speaking at the inaugural session, Chumki said although the country has achieved a noteworthy advancement under the leadership of Prime Minister Sheikh Hasina, but poverty and malnutrition still remain problems for the country.

The technical presentations were geared towards accelerating progress and past success by identifying and filing knowledge gaps on Sustainable Development Goals (SDGs) related to gender equality and eliminating hunger, under nutrition and extreme poverty in the country.