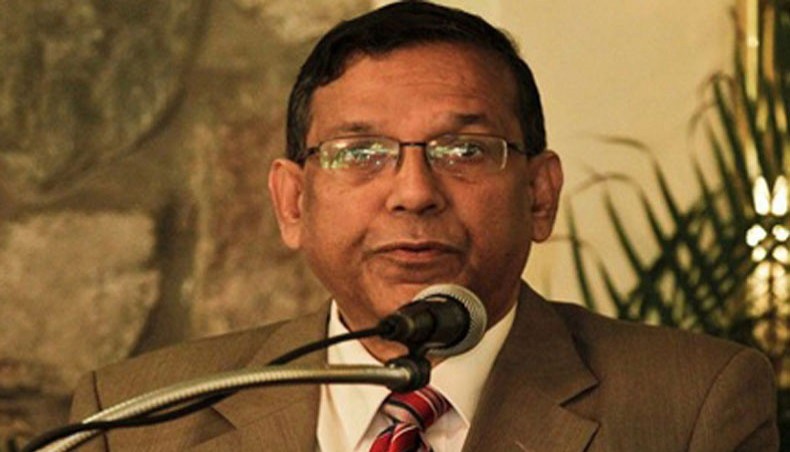 Reiterating that Chief Justice Surendra Kumar Sinha is sick, Law Minister Anisul Huq on Wednesday said there is nothing to do politics over the issue.

“Sickness is one’s individual matter and there’s nothing to do politics over the issue,” he told reporters at his office.

About BNP’s claim that the Chief Justice was forced to go on leave, the minister termed it unfortunate.

Asked about the whereabouts of SK Sinha, he said, “As far as I know, he’s staying in his residence and he’s sick. A doctor went to visit him at his residence yesterday (Tuesday) and is scheduled to visit today (Wednesday).”

Replying to another query as to why no one on behalf of the government visited the ‘ailing’ Chief Justice, Anisul said, “I’ve contacted the physician and I’ll definitely visit him when I’m in a position to go there. A cancer patient needs more time to be cured. We all know this.”

Asked why the Chief Justice did not go to hospital, he described it as his personal matter. “I can’t tell you anything about this. I can just tell you I’ll visit him soon.”The minister also read out before the reporters the letter the Chief Justice had sent to the President about his leave.

The letter reads: “This is for your kind information that I have been suffering from many physical problems. I had been under treatment for long being affected by cancer. Now, I’m suffering from various physical complications and I need rest to gain physical fitness. So, I want to enjoy a 30-day leave from October 3 to November 1.”

Responding to another query about the Chief Justice’s absence in Tuesday’s Supreme Court programme, Anisul posed a counter question, “Is it my responsibility to explain the matter? He went to his office. Please tell me whether the government made any obstruction to the programme.”

“After knowing about the sickness and leave of the Chief Justice, the government took constitutional steps and we’ve received the forwarding letter from the SC registrar general. The government appointed an acting Chief Justice as the post should not remain vacant. What is the need to do politics here?

He also urged all to pray for the Chief Justice’s recovery, saying his illness has put the minister in danger.

Asked whether SK Sinha is under house arrest, the minister said, “Absolutely not, absolutely not.”

Replying to another question, he expressed the hope that the Chief Justice’s condition will not deteriorate so much with his resignation, “I don’t want to go for any speculation and I hope he won’t be so sick that he submits a resignation letter. I hope he’ll be cured soon.”

He also thanked the Chief Justice for informing the President about his sickness and leave.