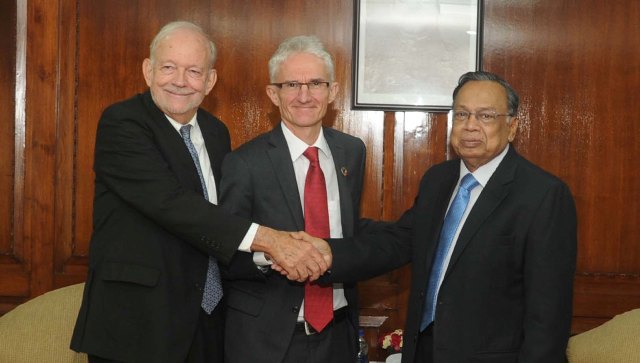 Bangladesh on Wednesday solicited support from the UN to ensure return of the forcibly displaced Myanmar nationals to their homeland in Myanmar.

Foreign Minister AH Mahmood Ali raised the issue when Under Secretary General of the UN Office for the Coordination of the Humanitarian Affairs (UN OCHA) Mark Lowcock and Executive Director of Unicef Anthony Lake jointly met him at his office.

Both of them have just returned from Cox’s Bazar after visiting the camps where the forcibly displaced Myanmar nationals have taken shelter.

The OCHA and the Unicef heads thanked the government and the people of Bangladesh for giving shelter to the helpless Rohingyas and deeply appreciated Bangladesh’s humanity and generosity.

They have also informed about the initiatives of UN to raise funds to cover the increasing humanitarian needs, reports UNB.

The Foreign Minister briefed them about the current situation regarding the influx of Rohingyas and apprised them that over 500,000 Rohingyas have entered Bangladesh in just one month.

He also mentioned that the presence of over 900,000 forcibly displaced Myanmar nationals is creating serious humanitarian challenge for Bangladesh.

Referring to the recent visit of Kyaw Tint Swe, Union Minister of the State Counselor’s Office of Myanmar on October 2, the Foreign Minister informed them that Bangladesh has emphasised the importance of sustainable return of the Rohingyas to Myanmar.

He also informed that the Myanmar minister conveyed their willingness to take back the Myanmar nationals taking shelter in Bangladesh.

The Foreign Minister thanked the Unicef head and the USG of UNOCHA for the useful discussion.