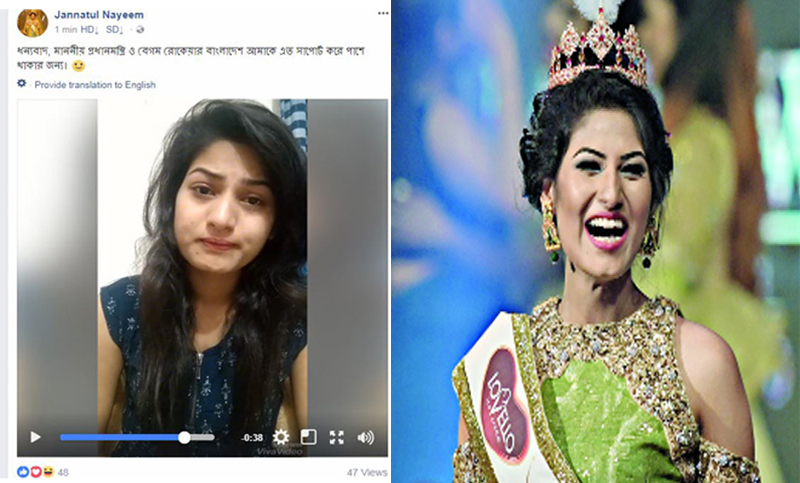 ‘Miss World Bangladesh 2017’ Jannatul Nayeem has admitted of her divorce on Tuesday in a video message on her Facebook wall.

She said in the video with weeping voice, “I did not bow down to any obstacles from my childhood. A father forced a 16-year-old girl to marry, that girl escaped herself from the stage of marriage. Now she is successful. She did not hear any words of her society. I did not accept child marriage.”

“If a girl forces to be married in the age of 16, that incident will be considered as a child marriage. I wanted to go ahead surmounting all these odds of our society.”

“I am a divorcee, fine, I am a girl. As a human, I have rights to represent myself in an international platform. I wanted nothing for myself. I just wanted to set an example before the girls of your country that what a woman can do if she wants.”

Rather, the judges selected runner-up Jessia Islam to represent Bangladesh at the Miss World contest to be held in November this year in Sanya, China.

On Monday, Jannatul Nayeem again made headlines after news on her marriage surfaced in Media.

According to a number of reports, the newly crowned Miss World Bangladesh got married to a businessman in Chittagong some four years ago. However, the couple separated some two and a half months after they tied the knot.

The organizers have called a press conference over the issue at Hotel Pan Pacific Sonargaon on Tuesday evening.