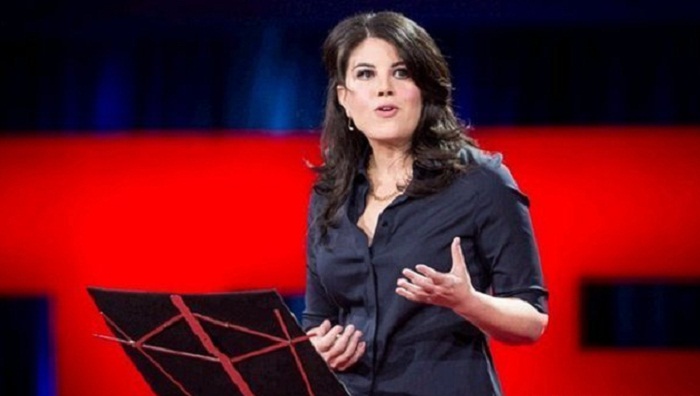 Monica Lewinsky has taken to the stage at the Ted (Technology, Entertainment and Design) conference to call for a more compassionate internet.
The former White House intern's love affair with President Bill Clinton made headlines around the world in 1998.
Describing herself as one of the first victims of cyberbullying, she said the internet had created a culture where people enjoyed viewing other's shame online.
Her speech received a standing ovation.
It is only the second time she has spoken publicly since disappearing from the public eye in 2005. In October she spoke at Forbes' Under 30 Summit.
She began her speech by joking she was the only 40-something who did not wish to be 22 again.
"At the age of 22, I fell in love with my boss. At the age of 24, I learned the devastating consequences."
The internet, she said, had made her own personal humiliation far worse.
"In 1998, after having been swept up in an improbable romance, I was then swept up into the eye of a political, legal and media maelstrom like we had never seen before."
And this particular scandal was, she said, "brought to you by the digital revolution".
"When the story broke it broke online. It was one of the first times that the traditional news had been usurped by the internet for a major news story," she told the Ted audience.
Although there was no social media in 1998 as we know it today, images of Lewinsky famously wearing a black beret quickly went viral online as did comments posted in response to online articles while jokes based on the details of her affair were emailed around the world.
"I went from being a private figure to being a publicly humiliated one worldwide. There were mobs of virtual stone-throwers."
"I was branded a tart, a slut, a whore, a bimbo. I lost my reputation and my dignity and I almost lost my life."
"Seventeen years ago there was no name for it but now we call it cyberbullying or online harassment," she said.
UK charity Childline reported a 87% increase in calls related to cyberbullying last year and, according the children's charity NSPCC, one in five children is now bullied online.
Last year, a study conducted in the Netherlands found that cyberbullying was more likely to lead young people to suicide than its offline equivalent.
What is cyberbullying?
It can include:
Texting scary or rude messages by mobile phone
Sending unpleasant photos by mobile phone
Using online message boards, chatrooms or social networks to post cruel messages
Deleting the victim's name or ignoring their messages on groups or social networks
What to do about cyberbullying
Tell someone, be it a family member, teacher or other trusted adult, if something upsets you
Don't respond to messages but save evidence
Don't take everything to heart; know yourself
Don't give out your own or friends' personal information
Be careful about what you write and post online
Know how to block or report people
Don't add to the problem by liking or sharing an unkind image or comment
Lewinsky told the story of 18-year-old Tyler Clementi, who was a student at Rutgers University in New Jersey when his roommate set up a webcam and captured video of him in bed with another man.
The resulting online harassment led Clementi to suicide, jumping from the George Washington Bridge.
"Tyler's tragic, senseless death was a turning point for me," said Lewinsky.
"It served to re-contextualise my experiences. I began to look at the world of humiliation and bullying around me and see something different … every day online, people -especially young people who are not developmentally equipped to handle this - are so abused and humiliated that they can't imagine living to the next day. And some don't."
That, she said, was unacceptable. She urged people to approach their online communications with more compassion.
"Post a positive comment, imagine walking a mile in someone else's headline," she said.
Culture of shame
Technology, she said, had extended the "echo of embarrassment".
"It used to only extend as far as your family, your school, your village, but now it is to the whole online community.
"The more shame, the more clicks and the more clicks the more advertising dollars. We are making money off the back of suffering."
She pointed to recent cases such as the leaking of nude photos of celebrities such as Jennifer Lawrence.
"One gossip website had five million hits for this one," she said.
And when Sony Pictures was hacked, the private emails between executives and actors were the ones that garnered the most interest because they were ones that would lead to "the most public humiliation" she said.
The internet had made people numb to the suffering and humiliation of others, she concluded.
Lewinsky ended her talk on a personal note, explaining why she had decided to speak out after a decade of silence.
"It was time to stop tip-toeing around my past, it was time to take back my narrative and let others know that you can survive it."