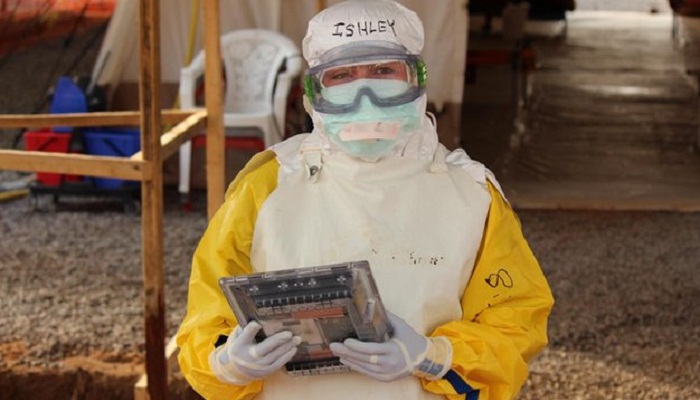 Medics wear full protective gear to shield themselves from the virus

A tablet device that can withstand being doused in chlorine has been developed to help medics caring for patients with Ebola.
Designed by technology volunteers and Google, it can be used even wearing gloves and in storms and high humidity.
Medecins Sans Frontieres put out a call for an Ebola-proof tablet to help teams record vital patient information.
At the height of the current outbreak, doctors were shouting patient notes across fences to avoid contamination.
High-risk zones
Ebola is passed on through close contact with infected bodily fluids.
Even a single piece of paper leaving a high-risk zone poses a risk of passing on the infection, the charity says.
And health workers caring for these patients have to be encased in full protective suits with goggles and multiple layers of gloves, despite the soaring temperatures.
But dictating notes across a fence at the end of exhausting shifts while wearing masks was a "recipe for error", MSF said.
To overcome these challenges the group of international tech volunteers came together, including Pim de Witte of Whitespell and Daniel Cunningham at Hack4Good. They were later joined by Google.
Ebola tablet device
The tablet has waterproof casing at an "industrial level" according to Ivan Gayton, technology advisor at MSF.
It can be dunked in 0.5% chlorine solution which kills Ebola - if used on unprotected hands this strength of chlorine could cause chemical burns.
Sharp edges of the tablet were removed so that protective clothing would not be pierced.
And it is charged quickly and wirelessly by being placed on a table. The tablet connects wirelessly to a tiny local network server that is roughly the size of a postage stamp.
Health workers use it to track a patient's progress - comparing pulse, temperature and other results over time.
Mr Gayton said: "Although we have just treated the largest cohort of Ebola patients in human history, we still know distressingly little about the progression of the disease.
"In the longer term if we are able to collect more and better information about our patients, we will also learn more about the disease and how best to treat it."
Difficult scenarios
The device has been tested at MSF treatment centres in Sierra Leone.
The charity hopes the technology - which is open-source - will be adapted for use in other difficult scenarios such as outbreaks of cholera.
Dr Eric Perakslis, from Harvard Medical School, works on separate global health innovation projects. He said: "A handful of companies are trying to find a technological solutions for the Ebola crisis.
"But they face a lot of challenges such as unreliable electricity. This one addresses all the challenges at once.
"And it will not just be useful for single patient encounters but for research on the virus too."
Ganesh Shankar, product manager at Google, said: "I think this kind of partnership represents the future of how non-governmental organisations are going to integrate technology into the work they do."