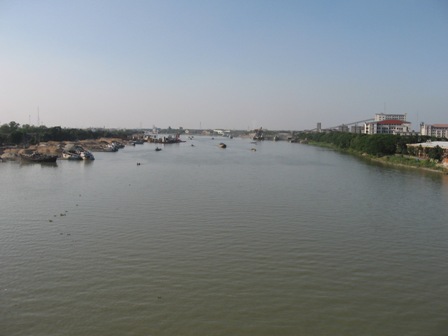 Speakers at a seminar on Sunday urged the government to take immediate steps to protect the country’s existing rivers.

Mentioning that local powerful people are grabbing the rivers in the name of development, the speakers also called for reclaiming those and saving them from dying.

They lamented the lack of appropriate laws to protect the rivers, saying those are being exploited in many ways by some corrupt people as there is no law.

Meanwhile, Jatiya Ganatantrik League formed a human chain in front of the Jatiya Press Club in the morning marking the World Rivers Day observed across the globe on Sunday.

Speakers at the programme said the country’s all rivers must be protected to ensure a better environment.

The theme of this year’s day was ‘Encroachment-pollution free rivers: Save Life and Nature.’

Bangladesh has been observing the World Rivers Day since 2010.

Bangladesh is a riverine country. About 700 rivers, including tributaries, flow through the country constituting a waterway of total length of around 24,140 kms.

Most of the country's land is formed through silt brought by the rivers.