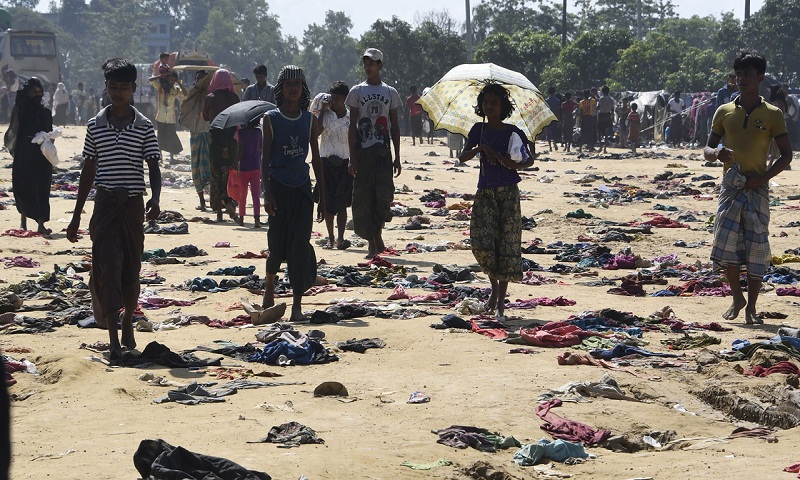 Bangladesh Prime Minister Sheikh Hasina headed for the UN General Assembly on Saturday to plead for global help coping with the Rohingya crisis, as the refugee deluge escaping a crackdown in Myanmar topped 400,000.

The prime minister left a day after her government summoned the Myanmar envoy for the third time to protest over its neighbour's actions. Hasina is to demand more pressure on Myanmar during talks in New York.

Bangladesh has been overwhelmed by Rohingya Muslims since violence erupted in Buddhist-dominated Myanmar's Rakhine state on August 25.

The United Nations said Saturday that the total number of people to have entered Bangladesh having fled the unrest had now reached 409,000, a leap of 18,000 in a day.

Conditions are worsening in the border town of Cox's Bazar where the influx has added to pressures on Rohingya camps already overwhelmed with 300,000 people from earlier waves of refugees.

The UN said two children and a woman were killed in a "rampage" when a private group handed clothes near a camp on Friday.

Hasina is to speak at the UN on Thursday.

"She will seek immediate cessation of violence in Rakhine state in Myanmar and ask the UN secretary general to send a fact-finding mission to Rakhine," a spokesman for the prime minister, Nazrul Islam, told AFP.

"She will also call the international community and the UN to put pressure on Myanmar for the repatriation of all the Rohingya refugees to their homeland in Myanmar," he said.

Foreign Minister AH Mahmood Ali said: "We will continue international pressure on the Myanmar government to immediately end its ongoing ethnic cleansing of the Rohingya."

As tensions mount between the neighbours, the foreign ministry on Friday summoned the Myanmar charge d'affaires in Dhaka to protest at alleged violations of its airspace by Myanmar drones and helicopter.

The ministry warned that the three violations between September 10 and 14 could lead to "unwarranted consequences". Myanmar did not immediately comment.

The deaths of the three refugees backed warnings by UN agencies and other relief groups that the crisis could get out of control.

The World Health Organisation and UN children's agency on Saturday launched vaccination campaigns against measles, rubella and polio. They estimate that 60 percent of the new arrivals are children.