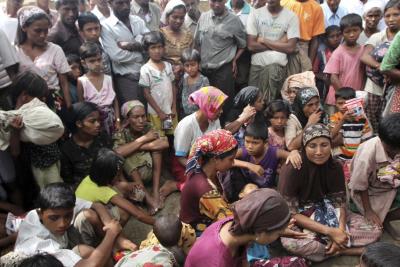 Police asked the Rohingyas, fleeing in thousands from the Rakhina state of Myanmar, to stay inside the refugee camp till their return to home, aimed at stopping their spread out across the country.

Police headquarters today issued a set of advice in this regard for the local people too. Those include not renting out their houses to Rohingyas and informing the local administration soon after they see the presence of refugees in their locality, said an official release.

As part of the police initiative, movement of the Rohingyas will be restricted within the camp in Cox's Bazar as measures for their accommodation, food and medical services have already been arranged in the camp, reports BSS.

The refugees even would not be allowed to take shelter in the houses of their relatives inside Bangladesh territory.

Police headquarters has requested the concerned road and water transport authorities and airways so that none could purchase their tickets without showing identity cards.

The police also requested the people to help as it is impossible for the law enforcers alone to stop the Rohingyas from spreading out across the country.

Amid escalating concern that the Rohingyas might get scattered across the country, police instructed its members to remain alert and take every possible measure to stop their spread out.

In the order, three SPs have especially been asked to intensify intelligence surveillance on road, water and airways so that the Rohingyas, fleeing from violence in Rakhine state in neighbouring Myanmar, cannot move from Cox's Bazar to other parts of the country.

Law enforcers have also been asked to update the list of the newly arrival refugees and remain alert to ensure that no Rohingya woman falls a victim to sexual harassment and none of them get involved in smuggling of firearms and drugs and any other criminal activities.

The police headquarters has also instructed to make necessary security arrangements in and around the Rohingya camps in Cox's Bazar.

Accordingly, the SPs of the three districts have alerted officers-in-charge (OCs) under their jurisdictions to remained alert and take prompt actions soon after getting information of arrival of Rohingyas.

Policemen have also been instructed to remain alert in case of verifying details of any person so no Rohingya can get passport of Bangladesh, he also said.

Earlier Home Minister Asaduzzaman Khan said, the government has alerted the law enforcement agencies to remain alert to stop fan out of the Rohingyas across the country.

He also said, "The government will allocate 2,000 acres of land in Cox's Bazar's Kutupalong area to open a new camp for the newly arrived Rohingyas. The camp will be divided into seven blocks and have barbwire fencing to prevent any kind of security deterioration."