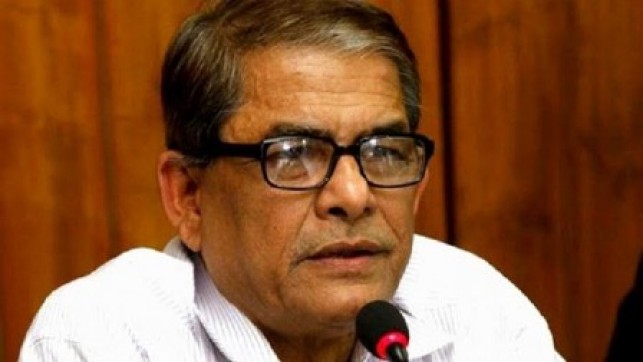 The BNP-led 20-party alliance has alleged that the government is trying to split the coalition to weaken it ahead of the 11th parliamentary election by intimidating its partners through repressive acts.

"The efforts are on to split the 20-party alliance as it was in the past, but our alliance is intact. The main motive behind making Kalyan Party general secretary MM Aminur Rahman is to slow down the alliance's politics and intimidate its partners," said BNP secretary general Mirza Fakhrul Islam Alamgir.

He came up with the allegation on Saturday while speaking at a press conference, on behalf of the 20-party alliance, at BNP chairperson's Gulshan office.

Fakhrul said though Aminur is not a big threat to the government, he has been made disappeared to make the alliance partners inactive by spreading panic among them, reports UNB.

He called upon the Home Minister and law enforcement agencies to track down all those made enforced disappeared, including Aminul, and return them to their families.

The BNP leader said now no citizen of the country has security as the incidents of enforced disappearance marked a rise across the country. "It seems to us Bangladesh has now turned into a security state. Any body can be now picked up any time without any warrant or any information."

He said it is the responsibility of the state and law enforcers to track down Aminur and others made disappeared and return them to their families. "The sate becomes the biggest terrorist when it doesn't give people proper information and deceives them. The menace of enforced disappearance emerged in the country since Awami League came to power. Unfortunately, it now has spread all over the country."

Fakhrul said Aminur's family and his party do not know the reason behind his disappearance. "We don't have any way to know it as police are not giving us any information about it. Under the circumstances, whom will we go to and who will help us?

Describing enforced disappearance as a serious crime against humanity, he warned that those involved in such crimes will be put on trial someday.

Referring to media reports, the BNP secretary general said two youths who were picked up by law enforcers one and half months back have been shown arrested as 'Neo JMB' members recently.

"We've been repeatedly saying you're hiding facts over the (militant) issue. Why are you staging drama over it? Every citizen has the right to know about it," he added.

Fakhrul called upon the government to take steps for holding a credible election under a non-party administration shunning evil tactics and repressive acts.

Turning to Rohingya crisis, Fakhrul said Rohingya issue took a serious turn as the government has failed to tackle it.

He criticised the government for not holding a meeting with political parties over the issue and work out strategy to overcome it.

The BNP leader alleged that government is widening division instead of making unity over Rohingya issue.

"We've been repeatedly calling upon to forge a national unity over Rohingya issue. Instead of doing it, the government obstructed BNP to distribute relief among them, Fakhrul bemoaned.

Kalyan Party Chairman Syed Ibrahim said Aminur went missing as he came out of their party's Nayapaltan central office for his local residence in Savar on August 27.

He demanded the government immediately return Aminur to his family and party.