27 checkposts to be set up to prevent Rohingya spread: Chitatgong DIG 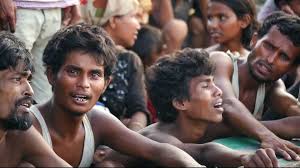 Twenty-seven police check-posts will be set up in the division to prevent the spread of Rohingyas across the country, said Deputy Inspector of General of Police (Chittagongrange) SM Moniruzzaman on Saturday.

"We're taking necessary measures so that Rohingyas fleeing persecution in Myanmar cannot spread to other parts of the country," he said during a meeting with Puja Udjapan Committee at his office, reports UNB.

Twenty-seven police check-posts will be set up at different places of the division, including Bandarban, Rangamati and Khagrachhari, to halt their spread, he said.

They have held more than 100 Rohingyas who fled to different areas in Hathazari, Banskhali and Sitakunda upazilas, he said.

The detained Rohingyas will be sent to a temporary shelter at Balukhali in Ukhia upazila.