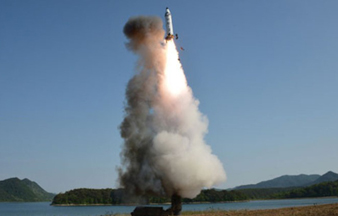 Bangladesh has expressed grave concern over the successive launching of 2nd ballistic missile over Japan by North Korea and urged it to refrain from missile tests that deviate from the cardinal principle of UN of "collective peace and security".

"We find it equally disconcerting that within a span of a month North Korea in defiance of the international community has launched such tests," a statement of Bangladesh foreign ministry said, reports BSS.

The statement read, "Through this unilateral act, North Korea has clearly undermined regional peace and security".

It said that North Korea should clearly demonstrate through its acts that it is willing to work for reducing tension in the Korean Peninsula.

"Bangladesh would like to align itself with the recent resolution of the UN Security Council that has strongly condemned the highly provocative ballistic missile tests conducted by North Korea". The statement read that Bangladesh will echo the sentiments expressed through the UNSC resolution that the nuclear and missile tests by North Korea have caused "grave security concerns around the world".