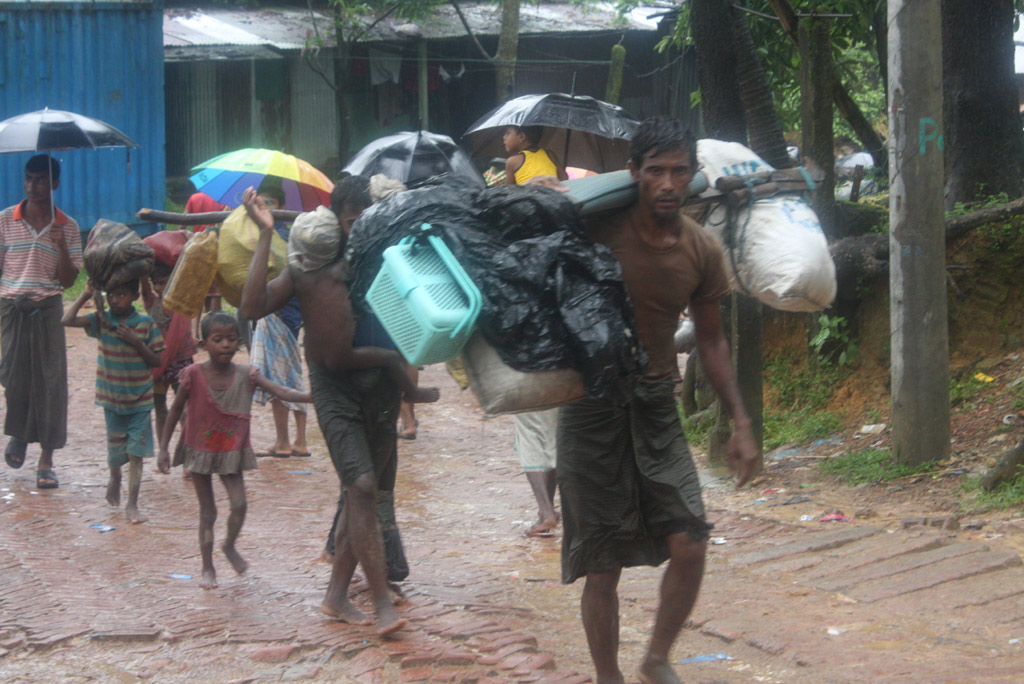 Rohingya refugees trudge through the rain and mud as they arrive at Kutupalong camp in Bangladesh after days on foot. Photo: UNHCR/Vivian TaThe humanitarian situation in parts of Bangladesh sheltering hundreds of thousands of Rohingya refugees continues to deteriorate, making the crisis one of the fastest growing refugee crises of recent years, according to the United Nations.

“[The crisis is] creating enormous humanitarian needs in an area of Bangladesh already affected by earlier refugee influxes, recent floods and not equipped to cope with large numbers of new arrivals,” Andrej Mahecic, a spokesperson for the Office of the UN High Commissioner for Refugees (UNHCR), told journalists at a media briefing in Geneva today.

According to estimates, some 380,000 Rohingya refugees, fleeing violence in Myanmar, have crossed the border into Bangladesh since 25 August.

“A visit to the area this week by a UNHCR team, led by Assistant High Commissioner for Operations George Okoth-Obbo, found people suffering real hardship and some of the most difficult conditions seen in any current refugee situation,” said Mr. Mahecic.

Refugees continue to arrive daily outside of the two established camps which are already substantially overflowing, and many people have received little meaningful help to date, he added.

The UN agency has been responding to the situation and assisting those coming but its in-country stocks have been exhausted, noted the UNHCR spokesperson, adding that deliveries of more aid – flown in earlier this week – are currently underway.

Challenges, however, are the greatest for children. According to the UN Children’s Fund (UNICEF), there are at least 240,000 children among the refugees, including about 36,000 who are less than a year old. There were also 52,000 pregnant and lactating women.

Conditions are ripe for the spread of disease [...] there are nowhere near enough latrines, and extreme mosquito activity has been forecast for the coming daysUNICEF spokesperson Marixie Mercado

“Conditions are ripe for the spread of disease,” Marixie Mercado, a UNICEF spokesperson highlighted at the briefing, noting that refuges have little protection from the elements and lack drinking water.

“There is nowhere near enough latrines, and extreme mosquito activity has been forecast for the coming days. It is important to note that even before the crisis, half of the children in Rakhine state [in Myanmar] had suffered from chronic malnutrition, meaning they were vulnerable to disease,” she said.

To help cope with this situation, the World Health Organization (WHO) is stepping up its efforts, and starting 16 September, will launch a polio and measles vaccination campaign to cover 150,000 newly arrived children aged 6 months to 15 years old, said Tarik Jasarevic, a spokesperson for the UN agency.

“In the coming days, [we will also] distribute emergency medical kits to cover 100,000 people, 2 million water purification tablets and cholera kits for 20,000 people,” he added, noting that the UN health agency is also supporting the Government of Bangladesh in providing medical teams to new spontaneous settlements.

The World Food Programme (WFP), the UN’s emergency food assistance agency, has also upped its response, delivering high-energy food bars, and together with partners, hot food and rice for cooking to tens of thousands of refugees.

Mr. Mahecic also noted that Bangladeshi communities have shown “remarkable generosity,” welcoming refugees into their homes and sharing resources with them.

However, as the number of new arrivals continues, UN agencies are in urgent need of additional funds to provide protection and life-saving assistance.

Among them, UNHCR has appealed for an initial amount of $30 million for its emergency response in the country until the end of year.

Similarly, UNICEF made an initial appeal for $7.3 million over three months, including almost $3 million for water and sanitation alone, but that amount was calculated on the basis of 200,000 people and that number had now doubled.