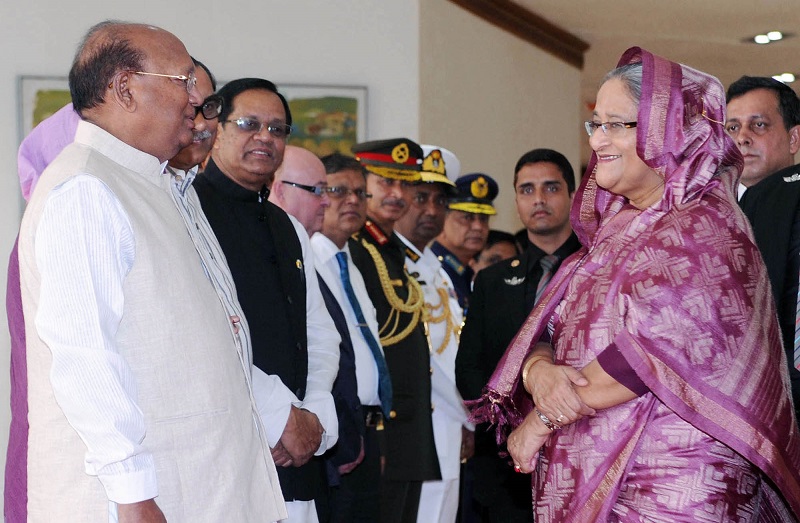 A Biman Bangladesh Airlines flight carrying the premier and her entourage members took off from Hazrat Shahjalal International Airport for Abu Dhabi, the capital of the United Arab Emirates (UAE), at 2:10 pm, BSS reports.

Bangladesh Ambassador to USA M Ziauddin and Bangladesh's Permanent Representative to UN Masud Bin Momen will receive the prime minister at the airport.

During her visit, the prime minister will stay in Grand Hyatt Hotel in New York.

Sheikh Hasna will address the UNGA in the afternoon on September 21 and have a bilateral meeting with UN Secretary General Antonio Guterres on the same day.

In the afternoon, the prime minister is expected to hold a bilateral meeting with her Bhutanese counterpart Tshering Tobgay before attending a high-level follow-up meeting on Global Deal for Decent Work and Inclusive Growth at Convene Conference Centre.

On September 19, the prime minister along with other heads of state and government will join the official lunch to be hosted by the UN secretary general.

The lunch will be followed by a high-level roundtable of the UN Secretary General's High Level Panel on Women's Economic Empowerment for Leaving No One Behind.

The prime minister will join the OIC Contact Group meeting on Rohingya Minorities at UNHQ in the afternoon. Later, she is likely to hold bilateral talks with Prime Minister of Mauritius Pravind Kumar Jugnauth.

Sheikh Hasina will join a welcome reception of US President Donald Trump in the evening at Palace Hotel at Madison Avenue. Later, she will attend a reception of Bangladesh community at New York Marriot Marquis.