The Three Amigos: Picabia, Schnabel, Willumsen and the Pleasure of Painting, at the NSU Museum of Art Fort Lauderdale 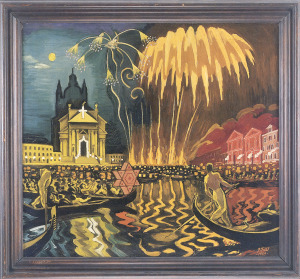 Art Basel visitors flying into the Fort Lauderdale airport this week are a very lucky bunch since they are only a 10-minute drive from one of the absolute highlights of this week, or any Miami Basel week in recent memory: the superb “Cafe Dolly: Picabia, Schnabel, Willumsen” exhibition at the NSU Museum of Art Fort Lauderdale. The rest of us, sadly, have to brave the roughly 50-minute drive from Miami Beach, but every minute cruising along the hellish South Florida highways is time well spent.

The show brings together some 75 works by three painters: the irresistibly charming French prankster Francis Picabia (1879–1953), the self-styled (and notoriously self-satisfied) New York auteur Julian Schnabel (now 63), and—a name that was new to me—the wry, freewheeling Danish maestro J. F. Willumsen (1863–58). They share a sincere, but not unmitigated, pleasure in figurative painting: an awareness of its limits, but also the desire to push headlong into forms of forbidden pleasure—unrepentant kitsch, eroticism, and copying.

The trip is worth it alone for the Picabias—the mysterious late works that the onetime Dadaist (and Cubist and Fauvist) made from the mid-1920s until the end of his life, by painting figures directly from movie posters and adult magazines, splicing them together. Cloaked in sex, melodrama, and psychological trauma, they intermingle irony and dedication a full half-century before Richard Prince’s Nurse paintings. (A sumptuous catalogue, produced by the J.F. Willumsens Museum, in Frederickssund, Denmark, where the show originated, provides details on his process.)

In L’Étreinte (The Embrace) (1941), Picabia paints a fully clothed man (he even wears a tie) as he leans over a smiling blonde on a bed, covered with a tangle of red-pink sheets, and in a jaw-dropping undated number, a woman with a chiseled face and bare breasts looks directly out of the picture, one arm bent behind her head, ready for her close-up. In the oddest Picabia I have ever seen, the circa 1941 Hanging Pierrot, the dead clown hangs from a tree above a woman in a white dress, her eyes closed and head tilted in what looks like some mixture of pain and ecstasy.

These would be sumptuous, spooky, and strange pictures coming from any painter, but they’re all the more so when you know Picabia’s history. The Museum of Modern Art is planning a retrospective for 2016. It seems certain to be revelatory.

Willumsen cribbed his imagery not from sex publications but from travel books and magazines in the late 1920s and ‘30s, and produced a series of Venetian scenes, often piquantly colored, with frames (yellow and pink here) to match. His thick lines and solid colors have a whiff to them of Marsden Hartley and, to be sure, Picabia, particularly when he decides to ham it up a bit, painting himself in a borderline cartoon style in a white robe, charcoal in hand, before a floating white canvas in 1933’s Self-Portrait in Painter’s Smock.

Schnabel comes across as the weakest of the bunch—he’s prone to what look like unfinished compositions—but seen alongside these fellow travelers, even his moments of obnoxious grandiosity take on a kind of moving, impressive punch. (One gets the sense that, in a few generations, when the Schnabel’s bombastic personality is the stuff of history, his work is going to rise in esteem quite a bit.)

The show’s organizers, artists Claus Carstensen and Christian Vind and the curator Ann Gregersen, of the University of Copenhagen and J.F. Willumsens Museum, have loosely threaded themes throughout, so that as you walk you can see how the three handle similar subjects, like the nude (Schnabel contributes two rather brave choices: one of his son Vito at the age of 10, the other of his wife May

Anderson while she was pregnant), the muse (Schnabel goes with a very funny portrait of the painter Albert Oehlen as an altar boy), Spanish culture, and abstraction, where Picabia is king. (That careful curating aside, the layout of the show, which is on view through February 1, 2015, and which takes its name from the famous cloned sheep, is somewhat awkward, with rooms crammed with pictures and others that are too sparse.)

What emerges is a completely persuasive case that these three artists were at work on similar projects throughout their very long careers, that they were bobbing and weaving, happily going against the dominant art-critical narratives of the day—Willumsen and Picabia against a modernism hell-bent on reductive abstraction (prefiguring, in their delight in found imagery and luscious painting one version of the Neo-Expressionism that would arrive in the decades after their deaths), and Schnabel against an ascendant photo-based, critical postmodernism (the jury is still out on the success of that project).

One of the most thrilling stretches comes on the second floor, which features a few of the abstract paintings that Picabia was also making late in life. (He was as busy and as complicated an artist in those years as he was earlier on.) There’s a tiny 1951 number called Point, which is just a golden circle on a blue background, another from 1938 with colorful thrumming lines on a black background that looks almost like a flower blooming at night, and the final painting he ever made, which has yellow, white, and green circles floating above part of a white circle, as if in the ether above the earth. He titled it La terre est ronde (1951)—The Earth Is Round—as if to say that all styles, all subjects, come back around again. Until then, they are waiting to be picked up, played with, and made new.