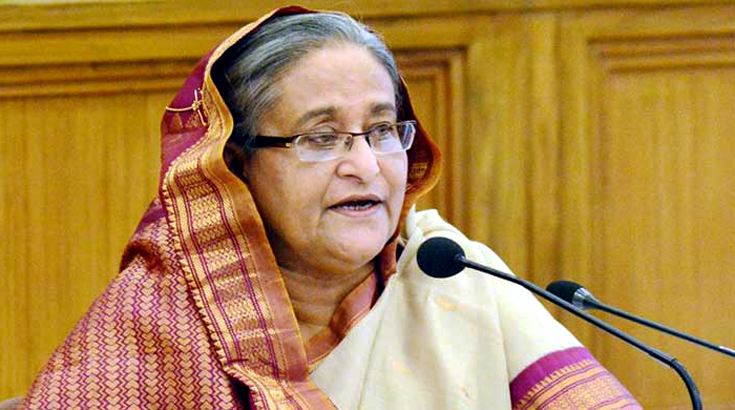 Prime Minister Sheikh Hasina has directed the authorities concerned to take necessary steps so that there is no loss of lives and property during any natural disaster.

"Bangladesh is a disaster-prone country due to its geographical location. So, we've to live with the phenomenon with necessary plans to keep the extent of damages and loss of lives to a minimum level during any catastrophe," she said while addressing a meeting of the National Disaster Management Council (NDMC) held at her office on Wednesday.

The Prime Minister said the geographical location of Bangladesh is such that natural disasters might happen anytime and the country's people will have to live facing various natural calamities, including flood, landslide and earthquake.

About the preparations of tackling natural disasters, she firmly mentioned that her government has taken all-out measures to face any kind of natural disaster like flood and landslide.

About the recent floods, she said her government had preparations to provide necessary assistance and support for the victims.

Hasina said the government has taken necessary measures so that there is no food shortage and people do not suffer. "The government is importing food grains to ensure food security," she said.


She put emphasis on starting cultivation and food production so that the future food security is ensured properly, urging all concerned to work together in such a way that no one has to suffer due to the flood and other kinds of natural disasters.

The Prime Minister said although flood causes disasters for farmers and other people through damaging houses and crops, sometimes it also becomes a blessing for the people as it carries silt and other ingredients to make the cultivable land more fertile on the other hand.

About the 'Mujib Killa' established by Bangabandhu Sheikh Mujibur Rahman to tackle the tidal surge along the coastal belt, she said the steps were taken to protect people. "The Bangabandhu government also set up 1,000 cyclone shelters in the coastal areas."
Hasina said following the ideals and initiatives of Bangabandhu, cyclone shelters and other shelter centres have been constructed to provide people with necessary shelter during the disaster time.

She said her government has developed the country in such a way that it is now capable enough of facing any disaster.

The Prime Minister said her government tackled a long-spanning flood in 1998 when about 70 percent of the country went under water and there was a prediction of death of 2 crore people. "But, the Awami League government successfully tackled the situation."

Ihsanul said the NDMC meeting reviewed the progress of implementation of the decisions made in its earlier meeting while the minutes of the last meeting were approved.