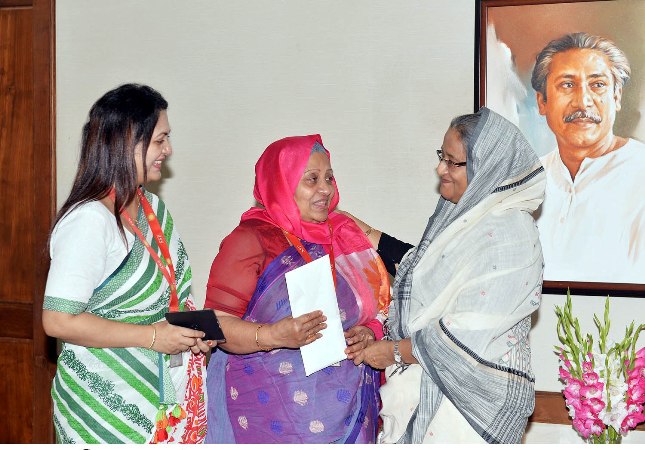 Prime Minister Sheikh Hasina has extended her helping hand to the popular actress of the silver screen Anwara Begum as she is living a miserable life following the sickness of her husband.

Knowing the miseries of Anwara Begum, popularly known as Anwara, the prime minister today gave financial assistance of Taka 30 lakh to her at Ganabhaban, the official residence of the PM, this afternoon, reports BSS.

PM's Press Secretary Ihsanul Karim told journalist that the prime minister gave savings certificates of Tk 25 lakh to Anwara for running her family and Tk five lakh for the treatment of her husband Mohitul Islam Fakir who has been suffering from paralysis.

The report said Anwara does not seek assistance, rather she wants the money from persons who owed to her for the treatment of her husband. For the money she was supposed to get, she is now moving door to door.

Reading the newspaper report, the premier directed her personal assistant to contact Anwara.

While receiving financial assistance from the prime minister today, Anwara said she was eagerly waiting to meet Sheikh Hasina for a long time. "I dreamt of you four times recently that became true ... it's unbelievable," the press secretary quoted Anwara as saying.

"I visited the historic house of Bangabandhu at Dhanmondi 32 many times for rehearsal of the drama," she recalled.

Anwara also remembered a meeting with Bangabandhu during her childhood on Dilu Road in Dhaka. "I saw Bangabandhu when he shook hands with my father while the great leader was crossing the area," she said.

Anwara added that when she asked her father if Bangabandhu knew him. "My father replied that he (Bangabandhu) may not know me personally, but he is our leader," she quoted her father as saying.

The prime minister said her government is trying to remove the helplessness and miseries of the poets, artistes and litterateurs. "We have constituted a trust fund for them to this end," she said.

Sheikh Hasina also said her government has taken initiatives so that poets, artistes and litterateurs could get government flats on hire and purchase basis.