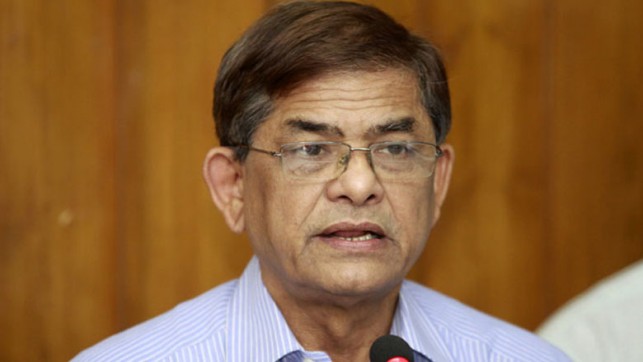 Voicing deep concern over the meetings of the Prime Minister, the Law Minister and the Attorney General with President Abdul Hamid on the Supreme Court’s 16th amendment verdict, the BNP has described it as an ‘unprecedented incident’.

“The Prime Minister together with the Law Minister and the Attorney General met the President yesterday (Wednesday), and discussed the Supreme Court’s 16th amendment verdict. This meeting has made the entire nation deeply worried. Such a meeting can’t be held, it is an unprecedented matter,” said BNP secretary general Mirza Fakhrul Islam Alamgir.

Fakhrul further said, “They’ve met the President taking an opposite stance against the Supreme Court verdict. We strongly condemn and protest the incident.”

Fakhrul alleged that the government is hatching a plot to snatch the independence of the judiciary.

He said Awami League general secretary Obaidul Quader met the Chief Justice earlier at his residence and took dinner there after the 16th amendment verdict, while “ministers are making offensive remarks about the Chief Justice. What the ruling party junior leaders are saying about the apex court and the Chief Justice can’t be allowed in a democratic system.”

The BNP leader said their party fears that the government has taken a new plot to completely destroy democracy and the independence of the judiciary. “We call upon the government to put up a strong resistance against such a move.”

He urged all the political parties, democratic institutions ad civil society members to come forward to protect the country, its constitution and democracy. “We all must get united to defeat the evil and undemocratic forces.”

Fakhrul said though the ruling party leaders often file sedition cases against BNP leaders and activists over trivial matters, Awami League leaders are openly indulging in anti-state activities. “You’re working against the country and destroying the constitution. You must be put in the court of people today or tomorrow, and punished for your all anti-state activities.”

He also came down hard on Law Commission Chairman and ex-Chief Justice ABM Khairul Haque for holding a press conference against the Supreme Court verdict violating his service rule.

Fakhrul also alleged that Haque committed a judicial offence by changing the verdict on the 13th amendment after going to retirement. “He should be put on trial.”

He recalled the political life of Salam Talukder and his contributions towards making BNP a stronger political organisation.

On August 20, 1999, Salam Talukder died on the way to Singapore for medical treatment.