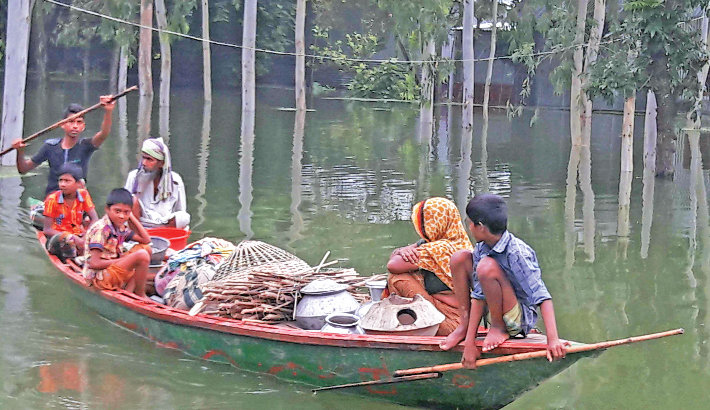 The displaced people started returning homes at most places following a further improvement in flood situation in northern districts on the Brahmaputra basin during 24 hours till 9am on Thursday, BSS reports.

Water Development Board (WDB) officials said the major rivers marked a further fall in their water levels following reduction in onrushing waters from the upstream during the period.

The officials said the improving trend might continue with further recession in water levels of the major rivers in all 10 flood-hit northern districts during the next 24 hours.

Water levels of the Brahmaputra marked a fall by 19cm at Noonkhawa, 15cm at Chilmari and 13cm at Fulchhari while Dharla marked fall by 22cm at Kurigram and Ghaghot by 10cm at Gaibandha points during the period.

The Teesta remained steady at Dalia, Jamuna marked a fall by 13cm at Bahadurabad and 4cm at Sariakandi and Punorvoba marked fall by 165cm at Dinajpur, Ich-Jamuna by 19cm at Phulbari and Tangon by 8cm at Thakurgaon points during the period.

However, water level of the Jamuna marked little rise by 3cm at Kazipur and 4cm at Sirajganj points during the period. The Punorvoba was flowing below DM by 200cm at Dinajpur, Tangon by 210cm at Thakurgaon, Ich-Jamuna by 12cm at Phulbari, Teesta by 50cm at Dalia and 115cm at Kawnia points at 9am today.

However, the Brahmaputra was flowing above its danger mark (DM) by 16cm at Noonkhawa, 64cm at Chilmari and 90cm at Fulchhari while Dharla 54cm above DM at Kurigram points at 9am today.

Dinajpur District Relief and Rehabilitation Officer (DRRO) Mokhlesur Rahman said the displaced people already have started returning their homes and normalcy might return in the district by the next couple of days.

According to the concerned DRROs, relief activities were also intensified in the other flood-hit districts despite continuous improvement of the flood situation since yesterday.

"A total of 737 medical teams have been extending health and medicare services to the flood-hit people in Rangpur division," said Divisional

"We have put maximum efforts on ensuring proper distribution of relief goods and cash money among the really flood-hit people," Ahmed added.