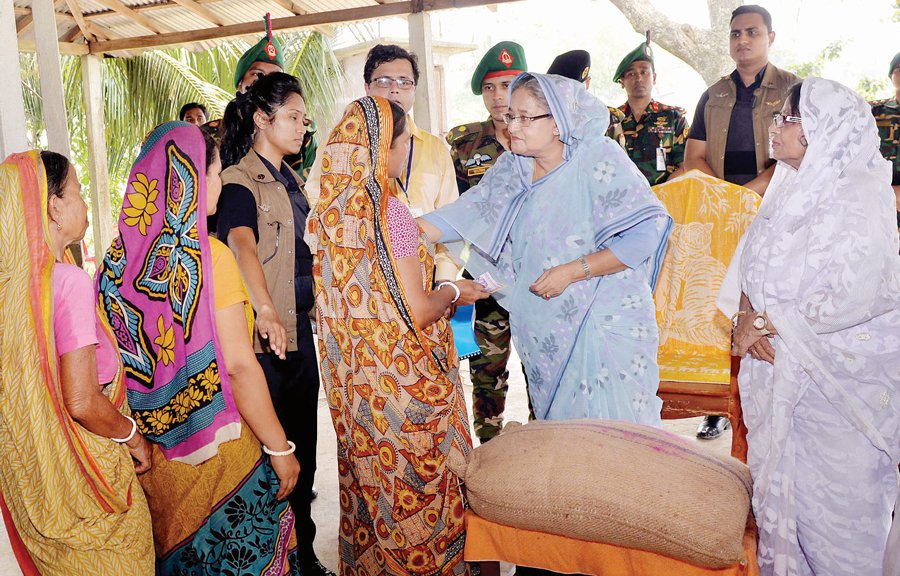 Prime Minister Sheikh Hasina will go to Kurigram and Dinajpur Sunday to see for herself the sufferings of the people in the flood-affected areas.

During the day-long tour, Sheikh Hasina will visit some flood-affected areas in the two districts and distribute relief materials among flood victims, an official at the Prime Minister's Office (PMO) said.

The overall flood situation is yet to be stable as there has been a slight improvement in the overall scenario in the northern districts of Dinajpur, Lalmonirhat and Gaibandha. With the floodwater moving towards the Bay of Bengal, fresh midland areas have started getting flooded.

Officials at the Water Development Board (WDB) said the Jamuna, Atrai and Ghagot rivers were still showing a rising trend, while that of the Dharla and Brahmaputra rivers were receding. However, all the rivers are flowing at or above their danger marks everywhere.

The floods triggered by monsoon rain and upstream water are wreaking havoc on life and valuables and crops in the countryside.

At least 57 people have, so far, been reported dead in 13 districts in the flooding, Department of Disaster Management data shows.

Twenty-three people died in Dinajpur, nine in Kurigram, five each in Lalmonirhat and Nilphamari, three in Jessore, two each in Chapainawabganj, Sunamganj, Netrakona and Gaibandha and one each in Thakurgaon, Jamalpur, Sirajganj and Moulvibazar.

The department said the deaths have taken place due to drowning, snake bite, lightning and wall collapse.

Thousands of flood victims are screaming for help and crying for relief as their stocks hit the rock bottom.

The department said the floods affected around 3,326,864 people in 22 districts, causing damage to valuables and crops worth crores of taka.

The flood death toll and the damage will be more than the government’s statistics, unofficial sources said.

The government has already started distributing relief to flood victims and evacuating them to safe shelters.A total of 471,553 people have already taken shelter in the flood shelters opened by the government.

Sources in the department said the government has allotted 321,259 tonnes of rice and already distributed 3387 tonnes.

Flood Forecasting and Warning Centre data said floodwater is spreading in many northern districts such as Thakurgaon, Dinajpur, Nilphamari, Lalmonirhat and Kurigram.

The water levels in the Jamuna and Padma rivers are increasing, a weather bulletin said.

The centre observes that this year’s deluge may cross the fury of the 1988 flood.

The FFWC data said the water flow at Goalando and Bhagyakul points in the Padma was flowing by 77cm and 15cm above the danger level.

Lowlands of Munshiganj, Faridpur, Madaripur, Shariatpur, Tangail, Kushtia and some parts of Dhaka city will get inundated for at least 10-12 days.

According to Bangladesh Meteorological Department, the country has experienced heavy rainfall in different parts of the country in the last 24 hours.

The Met office recorded 78mm rainfall in Habiganj, 72mm in Lama, in Rangamati, 56mm in Mohadevpur, 52mm in Chittagong and 49.8mm in Ramgarh.