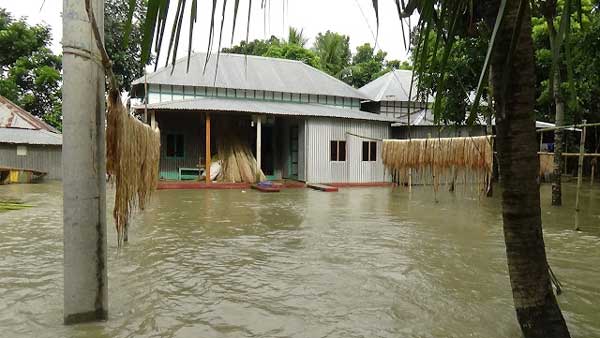 Around 100 villages of the low-lying areas in three upazilas - Sadar, Char Bhadrasan and Sadarpur – of Faridpur have been flooded due to onrush of water from the upstream and incessant rainfall, leaving more than one lakh people marooned, UNB reports.

Jahirul Islam, deputy assistant engineer of Water Development Board of the district, said the water of the mighty Padma River at Goalanda point has been flowing 92 centimetres above the danger level.

Villages in North Channel, Decrier Char and Aliabad unions under Sadar upazila were inundated as water level of the Padma River had risen by 16 centimetres in the last 24 hours.

Besides, 15,000 families of the district were marooned as Padma, Madhumati and Arial Khan and Kumar Rivers have been flowing above the danger mark, he added.

Goaldangi road in North Channel union and Mohammadpur road in Charmadhobdia, the only way to road connectivity of the unions, were submerged by floodwater, snapping the vehicular communication with the district headquarters.

Parvez Mollik, Faridpur district administration executive magistrate and NDC, said some 29 schools in low-lying areas of the district have remained closed as water level in the rivers has risen suddenly.

"We are preparing a list of flood-affected people and relief items will be distributed among them within one or two days," he added.