'Gift from God' Elvis is semi-divine, 40 years after death 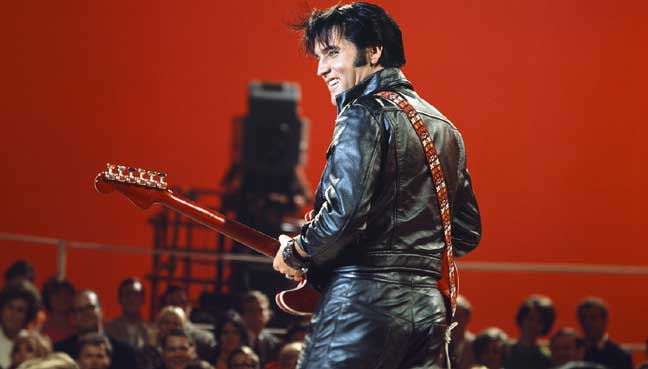 Pilgrims come all day every day, filing past in silence, fighting back tears as they place mementos at Elvis Presley's gravesite, pausing to reflect, take pictures or say a prayer.

More than 600,000 fans visit each year, paying tribute to the icon of popular culture, the once rebellious sex symbol turned family entertainer of whom John Lennon said "before Elvis there was nothing."

Forty years after his tragic death aged 42, floral tributes from around the world still line the Meditation Garden, where the king of rock 'n' roll is buried at his Graceland home in Memphis.

On Tuesday thousands, if not tens of thousands, are expected to attend this year's candle-light vigil to mark the anniversary of Elvis' death.

Lisa Bseiso will be one of them. She had what she calls a "very spiritual, deep encounter" with Presley's spirit when she first visited Graceland with her husband in August 2014.

"He was sitting in a chair," remembers the 36-year-old daughter of a Palestinian father and Colombian mother, born and raised in Qatar.

"He had tears coming down his eyes and he said 'Don't forget me, spread my legacy in your part of the world,'" she recalls.

So she went home and set up The Official Elvis Presley Fan Club of Qatar, which she now plans to expand to Dubai, Bahrain and Kuwait.

"He's a gift from God to all of us," she tells AFP at Graceland, where she is visiting with her Palestinian-Jordanian husband, Colombian mother and friends.

"God took him back home, but he's still here."

A life-long fan, listening to his music helped her recover from a car accident in 1999 that left her in a coma for two weeks, she says.

The idea that Presley's spirit lives on is central to his fans of all ages, from all countries, who find his music soothing in times of trouble and are moved by his rags-to-riches story and legendary generosity.

Presley is far more than just another poster child for the American dream or even a man whose looks matched the Greek definition of classical beauty, says British author Ted Harrison.

"The Elvis known today is not the real Elvis, but a mythological figure millions can relate to in their own way," says the author of "The Death and Resurrection of Elvis Presley."

"For some fans he also now fills a spiritual and religious vacuum in modern secular society. He is given a semi-divine, quasi-messianic status and mystical stories are told about his life."

Thousands have shrines to Presley in their homes, consider visits to Graceland a pilgrimage, write prayers on the wall outside and some even go so far as to confuse him with Jesus, Harrison says.

Bseiso does not elevate Presley to the status of prophet or Biblical figure, but has found in him a higher calling as she seeks to spread his music and challenge stereotypes about Arabs or the Middle East.

"I think when he was born God stamped him to be able to influence people and touch people," she said. "His music talks to you... it has a spiritual meaning in his words."

A 10-minute drive from Graceland, the guide at Sun Studio tells fans they are on "sacred and hallowed" ground in the basement studio where Presley recorded his first song "That's All Right" in 1954.

Ecstatic fans jostle to stand on the exact spot where he stood, and cradle and croon into the microphone he used, manically snapping photographs and tingling with delight.

"It's heaven!" sighs Daniela Soto-Cuadra, a 42-year-old lawyer and mother of two from Chile, getting married at Graceland on Monday to a man she's been dating only a month.

"I actually have goose bumps," says Tessa Bruns, 40, an anesthetist from Wisconsin bursting with happiness under her baseball cap.

"Being a somewhat religious person and a Catholic," she says, "I would say Elvis is a religion, the blues, the rhythm, his legacy."

So what would she have told Presley had she ever met him? "I would say I think I worship the ground you walk on."