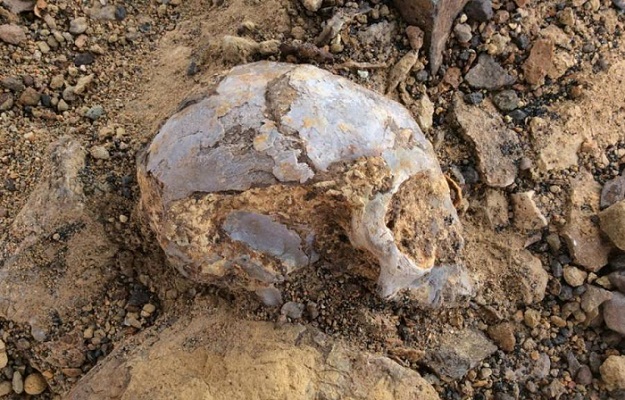 Buried under layers of volcanic ash in Northern Kenya, a skull the size of a lemon was recently uncovered by scientists.

It belonged to a baby ape that lived 13 million years ago and is remarkably preserved — complete with impressions of the creature’s brain on the inside and its adult teeth that had yet to grow in.

“We’ve been looking for ape fossils for years — this is the first time we’re getting a skull that’s complete,” Isaiah Nengo, the anthropologist who led the discovery, told National Geographic.

Even more exciting: the ancient ape baby belongs to an entirely new species of early ape called Nyanzapithecus alesi — which could be the earliest known common ancestor of all living apes, according to the teams findings, published this week in Nature.

The researchers said the information they’ll be able to glean from this species could help answer some big questions: “Did the common ancestor of living apes and humans originate in Africa, and what did these early ancestors look like?”

Nengo and his team had been digging in the Napudet region for two weeks without finding even a scrap of fossil or bone fragments and they were starting to lose hope, according to the Washington Post.

After a particularly disheartening day on September 4, 2014, one of his crew members, John Ekusi, lit a cigarette on the walk back to the car.

“Man, you’re gonna kill us with that smoke,” Nengo told him.

So Ekusi walked a couple hundred yards away. Then he stopped and began inspecting something on the ground.

“If you’re a fossil finder, you know that look,” he told the Post. “It’s like an atomic bomb can go off, and you don’t care, you’re so focused at what you’re looking for.”

Sure enough, the most complete skull of an extinct ape species had been discovered by a smoke break — a story tobacco companies should build their next ad campaign around.

“We just broke into a dance, we were so happy,” Nengo said.

They nicknamed the little guy “Alesi” meaning “ancestor” in the local Turkana language. I, personally, have taken to calling her “lemon head.”

“I sat with that specimen in my lap all the way until we got to Grenoble,” he said. “It did not leave my sight. If I was in the bathroom, it went with me.”

See the type of work it takes to make remains like Alesi’s come to life in this video:

The scans they took there revealed extremely detailed looks at the brain cavity, the inner ears and the incoming teeth. They deduced that Lemon Head had been about 1 year and 4 months old when she died.

Though they initially thought the baby had been a gibbon, the shape of the teeth and the ear tubes proved otherwise.

Apparently, inner ears offer clues to how creatures navigate the world, and Alesi’s showed that she moved in a “much more cautious way” than a gibbon would have.

Her teeth are what set her a part as a an entirely new species — one that could serve as an important clue to what both humans and apes were before we split.

Now, baby Lemon Head is back home in Kenya, where Dengo will continue to learn about how baby fossils impact the study of our evolutionary ancestors.