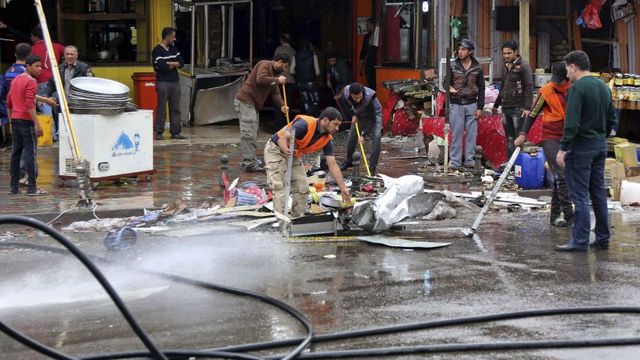 Feb. 7, 2015: Iraqis clean up the site of a suicide bombing that targeted a street filled with hardware stores, killing over 20 people and wounding at least 45, in the Iraqi capital's southeastern neighborhood of New Baghdad. (AP)

The U.N. mission to Iraq said Sunday that violence claimed the lives of at least 1,100 Iraqis in February, including more than 600 civilians.

The U.N. Assistance Mission in Iraq (UNAMI) said in a statement that 611 civilians were among 1,103 people killed last month, with the rest hailing from the security forces. It said at least 2,280 people were wounded, including 1,353 civilians. January's death toll was at least 1,375.

The most violent city was the capital Baghdad, with 329 civilians killed and 875 wounded, it said.

The U.N. numbers do not include the third of the country held by the Islamic State extremist group.

"Daily terrorist attacks perpetrated by ISIL continue to deliberately target all Iraqis," Mladenov said in the statement, using an acronym for the Islamic State group. "There are also concerning reports of a number of revenge killings by armed groups in areas recently liberated from ISIL," he added.

He called on Iraq's fractured leaders to reconcile, saying "an exclusively military solution to the problem of ISIL is impossible."

The statement came a day after series of attacks targeting public places and Shiite militia checkpoints in and around the capital killed at least 37 people. The deadliest, near the city of Samarra, saw two suicide car bombers attack checkpoints manned by Shiite militiamen, killing 16 Shite fighters and wounding 31.

Hours later, the IS group claimed responsibility for the Samarra attacks in a statement posted on an account used by the militants.

The Islamic State extremist group and other Sunni insurgents seized control of much of western and northern Iraq last year. According to UNAMI, last year was the deadliest in Iraq since the peak of the country's sectarian conflict in 2006-2007, with a total of 12,282 people killed and 23,126 wounded.