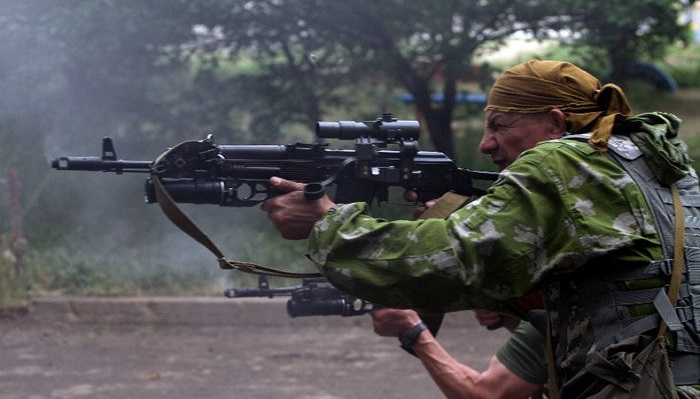 Kiev:  Two people were killed by shelling in east Ukraine Saturday as isolated clashes rattled a shaky truce with pro-Russian rebels and observers warned the country was at a "crossroads".
Photographer Sergiy Nikolayev from Ukrainian daily Segodnya died after getting caught in fighting at a flashpoint village close to the fiercely-contested Donetsk airport, the newspaper said in a statement.
Ultra-nationalist organisation Right Sector -- which is battling alongside government forces -- told AFP that one of its fighters was also killed in the attack.
Kiev military spokesman Andriy Lysenko said fighting had halted along most of the frontline but rebels were firing at Ukrainian positions around the ruined airport, one of the most fiercely contested locations in the conflict.
No government soldiers were reported killed over the past 24 hours.
The two warring sides both said they were continuing the withdrawal of heavy weapons from the front -- a key next step in a stuttering European-brokered peace plan to end fighting that has cost at least 5,800 lives since April.
Ukraine's military told AFP that it had completed the first stage of the withdrawal by pulling back its 100-mm cannons and was waiting for the order to start moving bigger calibre weapons.
Rebels claim they have already shifted the bulk of their heavy arms.
But while monitors from the Organization for Security and Cooperation in Europe (OSCE) have reported weapons movements on both sides they say it is too early to confirm a full pull-back.
- 'Humanitarian crisis' -
As the fragile peace deal seemed to gain traction, the OSCE's envoy to Ukraine told the UN Security Council on Friday that while there were encouraging signs, the country still risked all-out war.
"We seem to be at the crossroads, where we are facing the risk of a further escalation of the conflict or where common sense, responsibility, and humanity shall prevail and we may be able to walk on the road to peace," envoy Heidi Tagliavini told the 15-member council.
The Security Council's meeting on the conflict came a year to the day after Russian and pro-Moscow forces began occupying strategic sites on the Black Sea peninsula of Crimea.
Russia formally annexed the territory in March 2014, triggering an international furore. The uprising in Ukraine's east began the following month.
The UN said Friday there was a crisis in rebel-held areas, where people were living in "extraordinarily difficult circumstances".
"We really do have a humanitarian crisis in the separatist-held areas," UN aid coordinator in Ukraine Neal Walker said in Brussels, as the UN this week launched an appeal for $316 million for humanitarian aid.
The UN estimates 4.7 million people in or near the combat zones need help while another 300,000 people have fled to other parts of the country and a million abroad.