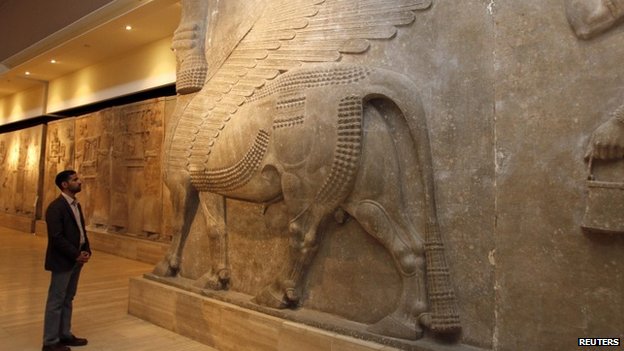 Iraq's national museum has officially reopened in Baghdad, 12 years after it was closed in the aftermath of the US-led invasion.

Many of the antiquities looted during the war have now been recovered and restored.

The museum's opening was brought forward in response to an Islamic State (IS) video showing statues being destroyed in Mosul.

"Those barbaric, criminal terrorists are trying to destroy the heritage of mankind and Iraq's civilization," Mr Abadi said while attending the museum's opening.

"We will chase them in order to make them pay for every drop of blood shed in Iraq and for the destruction of Iraq's civilization.''

The world heritage body Unesco has called for an emergency meeting of the UN Security Council to discuss how to protect Iraq's cultural heritage.

The Iraqi Deputy Tourism and Antiquities Minister, Qais Hussein Rashid, told AFP the actions of IS had spurred them into opening.

"The events in Mosul led us to speed up our work and we wanted to open it today as a response to what the gangs of Daesh did," he said, using an Arabic acronym for IS.

The Iraq Museum estimates that some 15,000 items were taken in the chaos that followed the toppling of Saddam Hussein. Almost one-third have been recovered.

The collection covers 7,000 years of history, with Mesopotamia - as Iraq was called for much of human history - considered the cradle of civilization.

Modern reality in Iraq is more violent. The areas in and around Baghdad continue to see daily violence, with at least 25 people killed in two separate attacks north of the capital on Saturday.