Growing Up Memoirs Of A Giant Litterateur 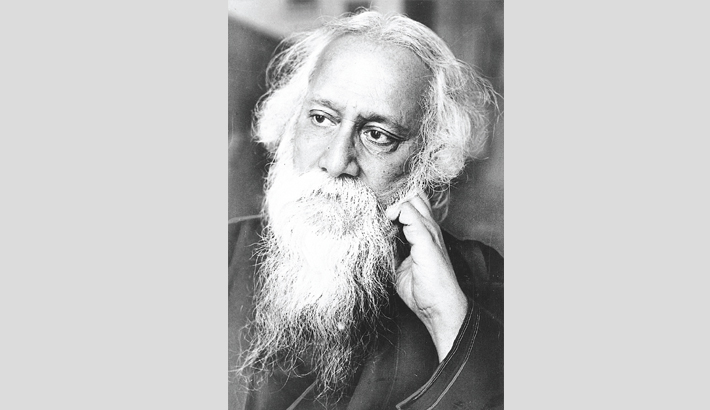 “I was born in the Calcutta of yesteryear. In those days horse-drawn carriages still rattled through the streets, leaving a trail of dust, the coachmen lashing the skinny horses with hempen whips when there was no tram, no bus or no motor cars.” That is how Rabindranath Tagore starts his second memoir Amar Chhelebela (My Childhood), that he wrote when he was nearing eighty.

The author collects a lot of flowers of memories to make a beautiful garland visualizing another era, the era which he relished as a child and he witnessed during his growing up years. He describes, without a trace of self-pity, the codified life he had to lead under his father′s instruction. The sense of wonder and delight in the seemingly commonplace experiences of boyhood helped him become a great poet. Born on May 7, 1861 (Baishakh 25, 1268 Bangla) in Calcutta’s Jorasanko, Rabindranath Tagore died on August 7, 1941 (Srabon 22, 1348 Bangla). Ahead of his 76th death anniversary morning tea pays tribute to this great litterateur by reviewing his wonderful childhood memoir Amar Chhelebela.

In his book Rabindranath Tagore depicts many aspects of that time. One of the major descriptions that comes in the book is the state of women at that time. He depicts the picture of how the women were kept in veils during that era. To show the women’s state he says, “Women used to go about in the stifling darkness of closed palanquins; they shrank from the idea of riding in carriages, and even to use an umbrella in sun or rain was considered unwomanly. Any woman who was so bold as to wear the new-fangled bodice, or shoes on her feet, was scornfully nicknamed ‘memsahib’, that is to say, one who had cast off all sense of propriety or shame. If any woman unexpectedly encountered a strange man, one outside her family circle, her veil would promptly descend to the very tip of her nose, and she would at once turn her back on him. The palanquins in which women went out were shut as closely as their apartments in the house.”

Like any other child, Tagore also had feeling of fear, imagination and playfulness. He describes his flights of fantasy into unknown realms seated in an old discarded palanquin, his fear of demons that supposedly resided in a cornice of the house, his distaste for formal education and his love for music and paintings. Tagore reveals many untold confessions of mediocrity and naiveté. He writes how disinterested he was in studies, how he tried to make excuse not to go to school, when he started to learn A, B, C, D and how he spent his early life in a village doing nothing, “My exercise books of all kinds, from beginning to end, kept unrelieved whiteness like a widow’s cloth. Confronted by such unprecedented determination not to study, my class teacher complained to Mr. Decruse.”

After coming back from school Rabindranath Tagore used to finish his home works under the supervision of his third brother, Hemendranath, who found that the boy was taught everything under the open sky. There were numbers of private tutors for Jorasanko house. Everything was taught in Bengali – arithmetic, algebra, geometry and natural science. There were lessons on anatomy. A Medical College student came to teach it.

Apparently, a whole skeleton was hung from the walls of his bedroom, “and the bones swayed in the wind and rattled together”. His English study was delayed till the age of twelve though the English teacher, Master Aghor, came every evening.


In the later years, Tagore was stuck in the education system of that time. He describes his dissatisfaction, “As one swims to pluck the lotus, it floats further and further away on the waves raised by one’s own arms and remains always out of reach.” He further expresses his dissatisfaction in this way, “There is a God who compasses the humiliation of those who ignore their own limitations.”

In many parts of the book Rabindranath Tagore expresses how he was felling at that time. He feels captive within a limited space from which he cannot escape or he finds himself on the roof which provides no path on which he can go beyond. Yet, this limited space couldn’t diminish all his dreams, rather Tagore invents sensual contact with the limitless which he calls the ‘outer world’ or ‘the unbound’. The boy Rabi could hear and above all see the limitless from his secluded house or from the roof. This sensual contact allowed him to have a clue, an indication of the nature of the limitless which gave him an opportunity to imagine and to fantasize. Hence, both in the physical world, as well as in the realm of imagination the limited and the limitless touch each other and interact. Tagore tells how he used to sit in a ramshackle, unused palanquin under the staircase of his house and dreams up various adventurous journeys into fairylands full of giants and dangerous dragons.

Rabindranath was highly influenced by the personality and activities of his elder brother Jyotirindranath. He repeatedly acknowledged it. Twelve years older Jyotirindranath treated his younger brother as an equal, though it was not the normal attitude towards the children of that time.

He wrote that old people even did not allow children to seat beside them. There was an invisible wall between generations as Rabindranath states, “It was an unwritten rule that the old men discourage the children… There was no bridge to go together between two generations.” But Jyotirindranath broke that wall and allowed his younger brother to accompany him. He answered all of Rabindranath’s questions without any hesitation and annoyance. Actually Jotiridranath turned into one of the chief mentors in Rabindranath’s ‘literary and emotional training’. Jotiridranath’s wife Kadambari Devi was almost of the same age of Rabindranath. She was nine when he was seven. She loved literature and quickly became Rabindranath’s favourite companion. Rabindranath also acknowledged the contribution of his sister-in-law and mentioned how she inspired him by saying, “You won’t be a poet like Bihari Chakraborty.”

Tagore also admitted that along with his literary practice, his brother Jyotirindranath also nurtured the talent of lyricist and composer Rabindranath. “Jyotidada played the piano while composing tunes in various new styles, keeping me by his side. I was given the task to match the tunes by setting words to them, right there... At the end of the day a mat and a pillow would be spread on the terrace for Bouthakrun and Jyotidada to come and sit. Jyotidada would draw the bow across his violin and I would sing.”

Rabindranath writes in his memoir that how his family music teacher, Vishnu Chakraborty, taught youngsters the common Bengali folk songs, without caring about the traditional practice. He describes how much he loved them. “The modern custom is first to practice scales – sa-re-ga-ma, on the harmonium, and then to teach some simple Hindustani songs. But the wise teacher who was then in charge of our musical studies understood that boyhood has its own childish needs. And these simple Bengali words would come much more easily to Bengali children than Hindi speech. Besides this the rhythm of this folk music defied all accompaniments by tabla. It danced itself into our very pulses.”

Tagore was not very happy about the changes that times brought with them. There are frequent occurrences of a poignant comparison of the ‘good old days’ with ghouls of modern Bengal. The tone in which the author expresses his displeasure however is not one filled with anger or frustration or fury but a tone full of poignancy. He pens, “As soon as the day of sunlight is over, the day of electric light begins. There is not much work done in it, but there is no rest, for the fire continues, as it were, to smoulder in the charcoal after the blazing wood has burnt itself out…”

Tagore compares the ways of entertainment of two different times. He regards the old one as the ‘Rajputro’ (Prince) and the new one as the ‘Sowdagarputro’ (son of businessman).

The language of the book is unlike his other writings. Rabindranath wrote his childhood memoir mainly for the young readers. That’s why he wrote it using comparatively easier language. But, he did not forget about his original style. His style of description, humour - everything gets new dimensions. Tagore’s humour is as subtle as his poignancy. It almost escapes you when you read, “The crows are pecking at the scattered grains. Our dog Johnny’s sense of duty is aroused and he drives them away barking…”

Tagore tries to give every single detail very clearly. When he portrays anything, the mention of places or locations is never without a reference to direction. You will find him using, ‘south facing balcony’, ‘east facing window’, ‘room towards north’, ‘terrace towards west’ etc. What a perfect sense of direction he had.

Besides Tagore’s personal life, his portrayal of that time covered many issues vividly. He illustrates the standard of living of that time. In his description he portrays how the young women were carried by 4–8 servants in palanquins, hackney carriages all over the city, rumours about the presence of ghosts in the dark corridors, reason and style of robbery, the wrestlers who entertained people, games of old days like top spinning, play of monkey, nature and so on. The memoir Amar Chhelebela has been written in an anecdotal narrative style, as a result we get glimpses of not only his growing up years but also the lifestyle of the people in those times.