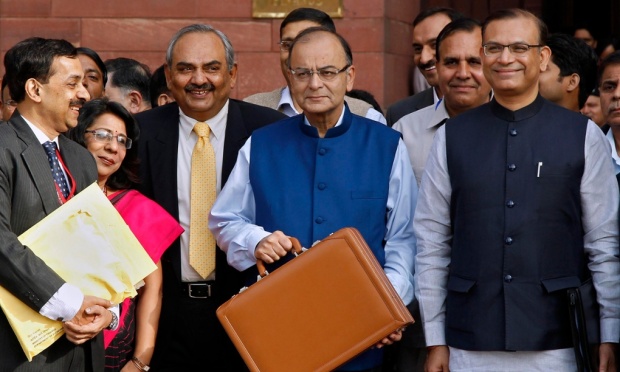 The Indian finance minister, Arun Jaitley, has announced a budget aimed at high growth, saying the pace of cutting the fiscal deficit would slow as he seeks to boost investment and ensure that ordinary people benefit.

Jaitley, delivering his first full-year budget since Prime Minister Narendra Modi’s landslide election victory last May, said growth would accelerate to between 8 and 8.5% in the fiscal year starting in April.

“India is about to take off,” Jaitley, 62, said early in his speech to lawmakers on Saturday. “The world is predicting that this is India’s chance to fly.”

Jaitley said he would stand by the fiscal deficit target for the 2014/15 year – which ends on 31 March – of 4.1% of gross domestic product.
But he pushed back by a year his medium-term goal of cutting the deficit to 3% of gross domestic product. In 2015/16 the deficit will be 3.9% of GDP, up from the 3.6% target inherited from the last government.

Reaping the benefits of low global prices for oil, India’s main import, Modi’s nationalist government says it is in a sweet spot with spare cash to modernise roads and railways without busting fiscal deficit and inflation targets.

Jaitley said it was time for a “quantum leap” on reforms and that incremental change “is not going to take us anywhere”, building on expectations that the 2015/16 budget would deliver big-bang reforms.

The minister said the government would seek to boost the efficiency of a rural job creation scheme that is India’s costliest welfare programme. It would also boost direct welfare payments into bank accounts, gradually replacing benefits in kind.

An overhaul of economic data has propelled India to the top of the league of fast-growing major economies, and the current account deficit is projected to fall below 1% next year, which would help stabilise the rupee and build up reserves.

“The settings are just right for finance minister Arun Jaitley to shun gradualism and go for broke,” the Hindustan Times wrote in an editorial.

The market rally has continued this year on expectations that legislative reform will push ahead stalled private investment and consumer demand, and reverse a decline in corporate earnings to make Asia’s third-largest economy a global growth driver.