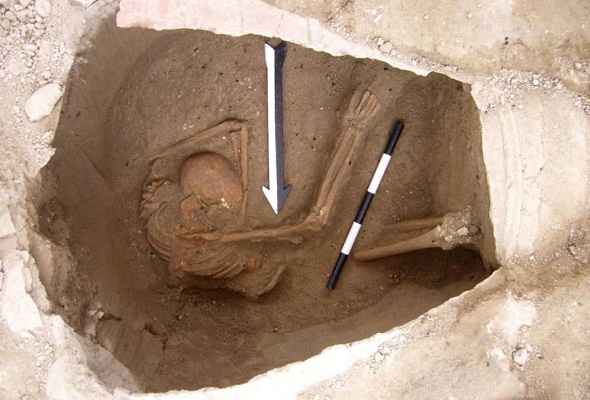 So central are the Canaanites to Hebrew and Christian scripture, that even non-believers today surely know their name. Yet, for centuries, not even scientists knew what became of this ancient race — until now.

Because the Canaanites inhabited the Levant (modern-day Syria, Lebanon, Jordan, Israel, and Palestine) in the second millennium BC, experts had always figured that the group’s bloodline eventually grew diluted and all but disappeared due to the vast and varied turnover of ethnic groups in the region at that time.

However, new research published in the American Journal of Human Genetics shows that the Canaanite bloodline has actually survived remarkably intact among just one county in the modern-day Levant: Lebanon.

After carrying out genome sequencing research, the scientists found that the present-day Lebanese share 93 percent of their DNA with the Canaanites.

The study’s authors reached this conclusion by analyzing the genome of five Canaanite corpses buried near what is now Saïda, Lebanon approximately 3,700 years ago, then comparing those results to the DNA of 99 living residents of Lebanon.

The resulting breakthrough represents one of the few revelations ever uncovered about the ancient Canaanites. As the Los Angeles Times writes:

“Later known as Phoenicians, the Canaanites have a murky past. Nearly all of their own records have been destroyed over the centuries, so their history has been mostly pieced together from archaeological records and the writings of other ancient peoples.”

Now, however, researchers are beginning to unlock the genetic mysteries of the Canaanites and discover how the race arose before the time of the Bible and what became of it after.

In short, the new study shows that the Canaanites emerged from a number of indigenous Levantine populations who’d settled the area some 10,000 years ago and eastern migrants who arrived between 6,600 and 3,550 years ago. Long afterward, sometime between 1800 and 200 BC, DNA from the Steppe peoples of what is now Russia entered the gene pool of what is now Lebanon, and this is what accounts for the seven percent of Lebanese DNA not shared with the Canaanites.

With these discoveries made, the researchers are now hoping to find out more about the peoples who inhabited the Near East during the time of the Bible. As study co-author Chris Tyler-Smith told National Geographic, “This is only the tip of the iceberg.”