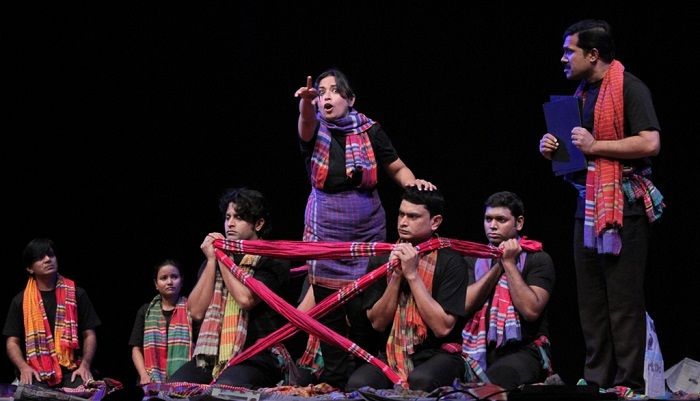 In observance of historic Hiroshima Day, popular theatre troupe Swapnadal will stage its anti-war production Tringsha Shatabdee at the Experimental Theatre Hall of Bangladesh Shilpakala Academy in the capital on Sunday evening.

Zahid Repon, director of the play, has adapted the script from the work of Indian playwright Badal Sarkar.

A narrator opens the play raising questions about the war and seeking the trial of the war-criminals.

He interrogates some historical characters such as Einstein (who invented the theory of atom bomb), Major Fereby (the pilot of the aircraft that dropped the bomb on Hiroshima), and Major Claude Itharby (who carried the nuclear bomb to Nagasaki and later went insane on his realisation of the crime).

In addition, he has raised questions about contemporary brutal war waged by the American forces in Iraq and Afghanistan. And through a replicated military exercise, he has depicted the nuclear activities by the global superpowers.

For the play, Zahid Repon will play a few roles, including those of the narrator and protagonist.

The set, props and costume of the play will be designed by Zahid Repon, Jueyana Shabnam and Rownak Labani.