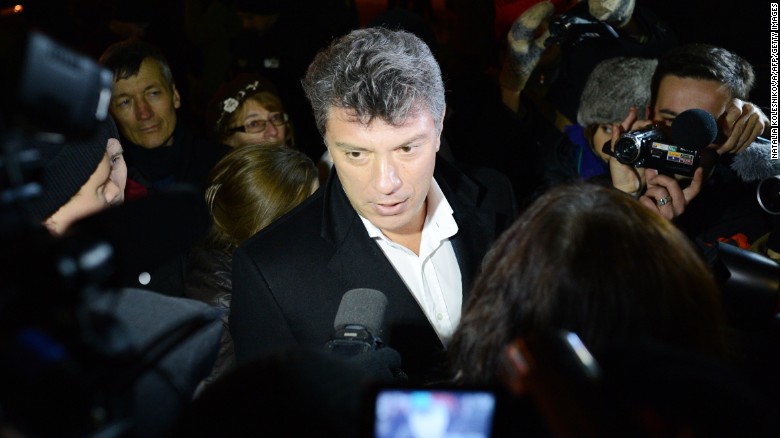 A leading Russian opposition politician, former Deputy Prime Minister Boris Nemtsov, has been shot dead in Moscow, Russian officials say.
An unidentified attacker in a car shot Mr Nemtsov four times in the back as he crossed a bridge in view of the Kremlin, police say.
He died hours after appealing for support for a march on Sunday in Moscow against the war in Ukraine.
Russian President Vladimir Putin has condemned the murder, the Kremlin says.
President Putin has assumed "personal control" of the investigation into the killing, said his spokesman Dmitry Peskov.
It "bears the hallmarks of a contract killing," said Mr Peskov.
US President Barack Obama condemned the "brutal murder" and called on the Russian government to conduct a "prompt, impartial and transparent investigation".
Thorbjorn Jagland, secretary general of the Council of Europe, condemned the killing, saying in a tweet: "I am shocked and appalled key opposition leader Boris Nemtsov was shot. Killers must be brought to justice."
In a recent interview, Mr Nemtsov had said he feared Mr Putin would have him killed because of his opposition to the war in Ukraine.
Mr Nemtsov, 55, served as first deputy prime minister under President Boris Yeltsin in the 1990s.
He had earned a reputation as an economic reformer while governor of one of Russia's biggest cities, Nizhny Novgorod.
Falling out of favour with Yeltsin's successor, Mr Putin, he became an outspoken opposition politician.
Mr Nemtsov was shot at around 23:40 (20:40 GMT) on Friday while crossing Moskvoretsky Bridge accompanied by a woman, Russia's interior ministry said.
He was shot with a pistol from a white car which fled the scene, a police source told Russia's Interfax news agency.
According to Russian-language news website Meduza, "several people" got out of a car and shot him.
One of the politician's colleagues in his RPR-Parnassus party, Ilya Yashin, confirmed Mr Nemtsov's death.
"Unfortunately I can see the corpse of Boris Nemtsov in front of me now," he was quoted as saying by Russia's lenta.ru news website.
Flowers were left at the site of the shooting through the night.