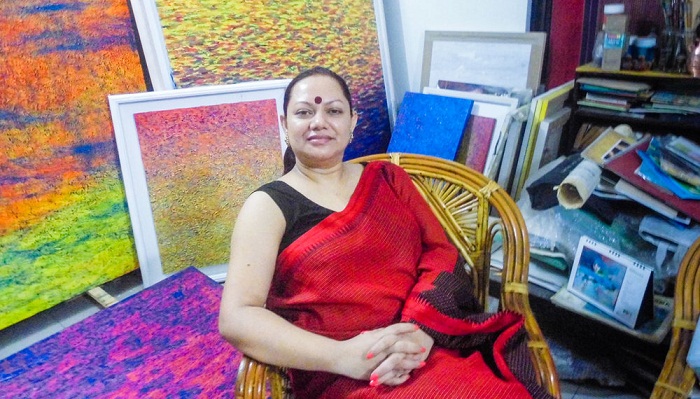 The cover of a book titled 'Maksuda Iqbal Nipa-Episodes of Her Gaze' was also unveiled at the inaugural ceremony of the exhibition held at the main auditorium of the National Museum.

The exhibition with 20 exclusive artworks of Nipa who is renowned for her colourful abstractions often composed on very large canvases will remain open from 9:30 am to 5:30 pm every day from Saturday to Thursday and from 2:30 pm to 7:30 pm on Friday till August 10.

The South Korean ambassador said Bangladesh is the pioneer in the South Asia to promote arts. "Bangladesh is a strong country in terms of art."

"I believe the art is the spirit of our humanity. Without art, the world looks desolate like Sahara desert... with the power of the art, the world would be lighter, brighter and better to live," he said.

Lauding Nipa, Ahn Seong-Doo said she is not only famous in Bangladesh but also in Korea. Nipa had an exhibition in Korea and spectators were happy to see her works and the event was well covered by Korean media. "So, she contributed very much to promoting bilateral relations too," the Korean ambassador added.

Julia Niblett described Nipa as a wonderful gift from Bangladesh to the world, saying her book showcases magnificent abstract paintings.

"I would like to propose the right to artistic endeavour taking opportunity and ability to engage with art at any stage from creation to preservation," he added.

Spanish Ambassador to Bangladesh Alvaro de Salas and diplomats from other countries, including the USA, Norway and Pakistan, artist Kalidas Karmakar and cultural personality Ramendra Majumder were, among others, present at the programme.