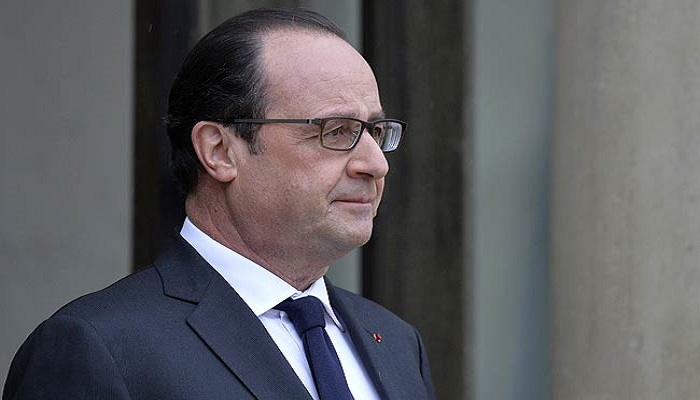 Manila:  French President Francois Hollande will on Thursday arrive in the Philippines with actresses Marion Cotillard and Melanie Laurent to promote the fight against climate change.
The two-day trip to the Philippines, the first by a French head of state, is Hollande's latest attempt to drum up support ahead of a United Nations climate change conference being hosted by France in December.
Hollande says he is determined to "leave a mark" on history by fostering a historic agreement to limit global warming that can make up for the failure to reach an accord in Copenhagen in 2009.
The Philippines is seen as a frontline state in the battle against climate change, having been battered by relentless storms in recent years that have emerged from the Pacific Ocean and claimed many thousands of lives.
These included Super Typhoon Haiyan, the strongest storm ever recorded on land, which left more than 7,350 people dead or missing in November 2013.
Hollande will meet with Philippine President Benigno Aquino on Thursday, when they are expected to jointly call on world leaders to ensure that the Paris climate summit is a success.
The goal of the Paris pact, which must enter into force by 2020, is to limit warming to two degrees Celsius (3.6 degrees Fahrenheit) over pre-Industrial Revolution levels.
Scientists warn that at current greenhouse gas emission trends, Earth is on track for double that, or more -- a recipe for catastrophic droughts, storms, floods and rising sea levels.
However most followers of the UN climate change diplomatic process are sceptical a pact can be agreed in Paris that will be ambitious enough to achieve the two-degree goal.
In an effort to raise awareness about the climate change fight while in the Philippines, Hollande will bring with him Oscar winner Cotillard and fellow French actress Laurent.
UN climate chief Christiana Figueres will also join the delegation.
In what shapes as the most symbolic and emotional leg of Hollande's trip, he will on Friday visit the small town of Guiuan in eastern Philippines that was devastated when Haiyan hit with winds of up to 315 kilometres (195 miles) an hour.
A number of trade agreements on "green" sectors, including in transport, renewable energy and water treatment, are also expected to be signed.
The leaders are also expected to discuss the tense territorial dispute between the Philippines and China over their rival claims to parts of the South China Sea.