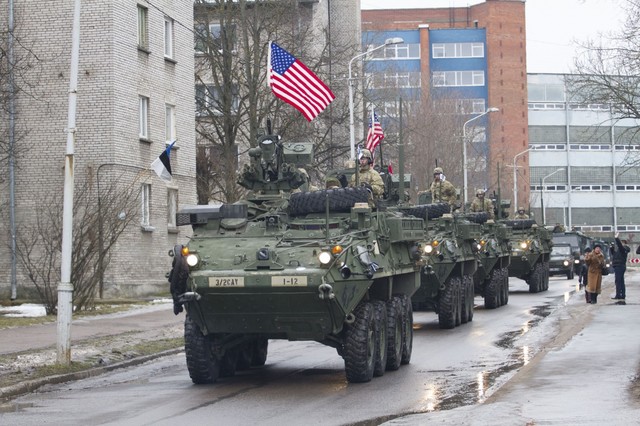 U.S. military combat vehicles paraded Wednesday through an Estonian city that juts into Russia, a symbolic act that highlighted the stakes for both sides amid the worst tensions between the West and Russia since the Cold War.

The armored personnel carriers and other U.S. Army vehicles that rolled through the streets of Narva, a border city separated by a narrow frontier from Russia, were a dramatic reminder of the new military confrontation in eastern Europe.

The soldiers from the U.S. Army’s Second Cavalry Regiment were taking part in a military parade to mark Estonia’s Independence Day. Narva is a vulnerable border city separated by a river from Russia. It has often been cited as a potential target for the Kremlin if it wanted to escalate its conflict with the West onto NATO territory.

Russia has long complained bitterly about NATO expansion, saying that the Cold War defense alliance was a major security threat as it drew closer to Russia’s borders. The anger grew especially passionate after the Baltic states joined in 2004, and Russian President Vladimir Putin cited fears that Ukraine would join NATO when he annexed the Crimean Peninsula in March last year.

Russia’s Baltic neighbors, meanwhile, have said that what happened in Ukraine demonstrates exactly why they wanted to join NATO in the first place.

U.S. tanks rolled through the streets of Riga, Latvia in November for that nation’s Independence Day parade, another powerful reminder of U.S. boots on the ground in the region. The United States has sent hundreds of military personnel to joint NATO exercises in the Baltics. NATO nations committed in September to forming a rapid reaction force that could deploy quickly to eastern Europe if they are invaded.