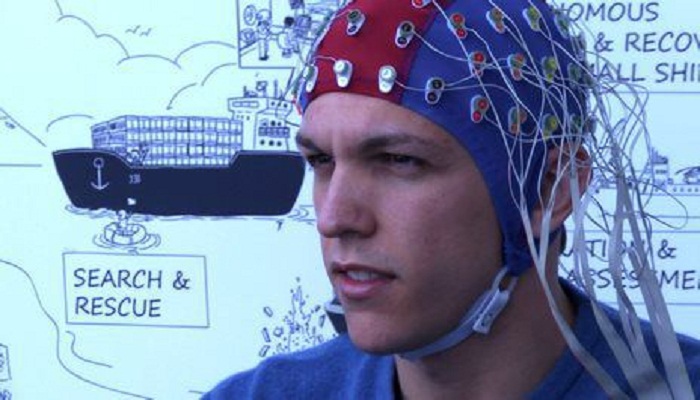 Technology that allows a drone to be piloted from the ground using only a person's brainwaves has been demonstrated in Portugal.
The company behind the development, Tekever, said the technology could in the short term be used to enable people with restricted movement to control aircraft.
Longer term the firm said piloting of larger jets, such as cargo planes, could be controlled in this way without the need for a crew on board.
However, one aviation expert told the BBC he thought the industry would be unlikely to adopt such technology due to a perception of being potentially unsafe.

Drone specialist Tekever, which works with security firms, police forces and the military, adapted existing Electroencephalography (EEG) technology so it could issue instructions to the software used to give the unmanned drone instructions.
EEG works by detecting activity in specific parts of the brain. After several months of training, "pilots" are said to be able to teach their brain how to think about moving a small circle on a computer screen either up or down, which in turn steers the drone left or right.
"We believe people will be able to pilot aircraft just like they perform everyday activities like walking or running," said Ricardo Mendes, Tekever's chief operating officer.
"We truly believe that Brainflight represents the beginning of a tremendous step change in the aviation field, empowering pilots and de-risking missions, and we're looking forward to deliver these benefits to the market with highly innovative products."

In the future, some of this technology may be put to use to control much larger aircraft, although Mr Mendes acknowledged considerable challenges with both regulatory hurdles and public confidence.
Those concerns were echoed by John Strickland, an independent aviation consultant based in London.