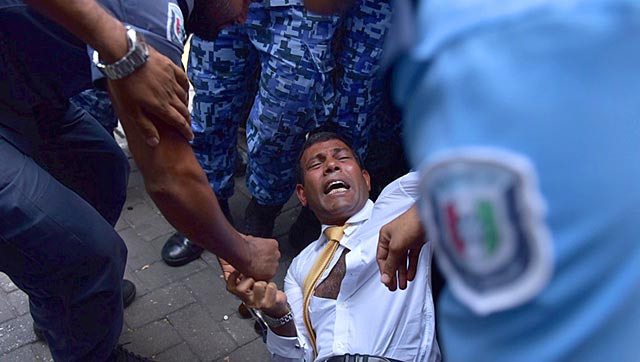 Maldives police try to move former president Mohamed Nasheed during a scuffle as he arrives at a courthouse in Male. (AFP Photo)

The government of the Maldives on Tuesday criticized foreign countries and groups that expressed concern over its recent arrest of an ex-president, saying it will not accept advice on domestic issues.
Foreign minister Dunya Maumoon said the arrest of former President Mohamed Nasheed was conducted lawfully and he would receive a fair trial.
The United States, India, the United Nations and the European Union were among those who expressed concern over Nasheed's detention on Sunday for ordering the arrest of a top judge when he was president three years ago.
Nasheed was charged under an anti-terror law, and a court ordered that he be held in detention until the trial ends.
He is accused of ordering the military to arrest Criminal Court Chief Judge Abdulla Mohamed without proper authority, holding him for a lengthy period without a trial or legal counsel, and ignoring a Supreme Court order to release him.
Nasheed's opposition party says his arrest and prosecution under the terror law are politically motivated.
The government says Nasheed was detained because he might flee, and that the terror law covers an array of actions against the state, not just violent terrorism.
"Those who prefer to issue public statements about an ongoing legal case, or on a domestic political situation, are advised to do a basic fact-check, before bandwagoning on to accusations made by a political party," Maumoon said in a statement.
The government "will not take instructions from a foreign government on any issue in governing the country," she said. "I wish to call upon our international partners to recognize the defining principle of the international system, which is to refrain from acts and signals that could undermine the sovereignty of independent states."
Nasheed became the country's first democratically elected president in 2008, ending 30 years of autocratic rule by the foreign minister's father, Maumoon Abdul Gayyoom.
Nasheed resigned in 2012 after weeks of public protests against his order to arrest the judge. He lost the 2013 presidential election to Maumoon Abdul Gayyoom's half-brother, Yameen Abdul Gayyoom.