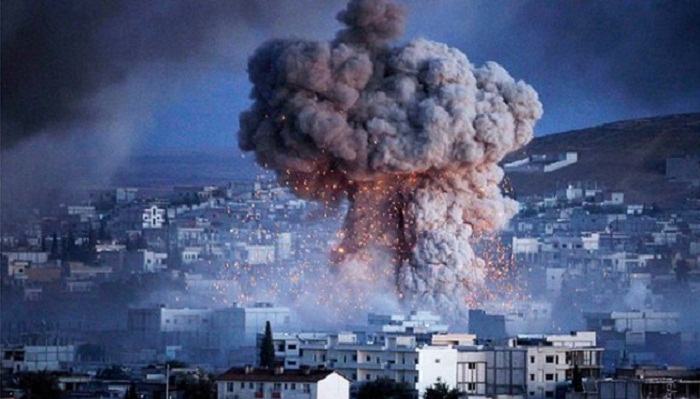 Amnesty International has urged the five permanent members of the UN Security Council to give up their power of veto in situations of mass atrocities.
In its annual report, the rights group said the global response to an array of catastrophes in 2014 had been shameful.
Richer countries were guilty of taking an "abhorrent" stance by not sheltering more refugees, Amnesty said.
The outlook for 2015 was bleak, the group added.
Saying that 2014 had been a catastrophic year for victims of conflict and violence, Amnesty said world leaders needed to act immediately to confront the changing nature of armed conflict.
Salil Shetty, the organisation's secretary general, said in a statement that the United Nations Security Council had "miserably failed" to protect civilians.
Instead, the council's five permanent members - the UK, China, France, Russia and the US - had used their veto to "promote their political self-interest or geopolitical interest above the interest of protecting civilians," Mr Shetty said.
Part of the solution would be those countries surrendering their Security Council veto on issues related to mass killing and genocide, Amnesty added.
It argues that if the use of the veto in the Security Council had already been restrained in this way then it could have prevented Russia using its veto repeatedly to block UN action over the violence in Syria.
This might have resulted in President Bashar al-Assad being referred to the International Criminal Court, in achieving greater access for badly needed humanitarian aid and in further ways of helping civilians, writes BBC world affairs correspondent Mike Wooldridge.
The UK government has not yet made a specific commitment in favour of the voluntary renunciation of the veto.
But the Foreign Office said in response to the Amnesty report: "The United Kingdom wholeheartedly supports the principle that the Security Council must act to stop mass atrocities and crimes against humanity.
"We cannot envisage circumstances where we would use our veto to block such action."
Amnesty's annual report makes for sober reading, notes our correspondent.
This is unsurprising, he adds, given the atrocities committed in Syria, Iraq, Nigeria, Central African Republic and other countries.
Amnesty's report said that 2014 had led to one of the worst refugee crises in history, with four million Syrians displaced by war and thousands of migrants dying in the Mediterranean.
The group criticised the response of European leaders to the crisis.
It said the efforts of wealthy countries to keep refugees out took "precedence over their efforts to keep people alive".
Amnesty also used its report to urge governments to adhere to a worldwide agreement on arms.
A global treaty came into force last year and aims to regulate the arms industry by controlling the supply of weapons to criminal groups.